ANAHEIM, Calif. — BlizzCon isn’t for someone like me. If you combine the hours I’ve spent playing StarCraft, Diablo, and World of Warcraft, that number would still be in the single digits. I have no idea who Garrosh Hellscream is, nor can I tell you the best strategies to use against the Zerg in StarCraft II.

So why was I here?

I spent two days trying to figure that out. Unlike other public game conventions such as the Penny Arcade Expo, Germany’s Gamescom, or the various Comic-Cons, BlizzCon has one laser-focused objective: to celebrate publisher Blizzard Entertainment and its games. The Irvine, Calif.-based studio has held a BlizzCon almost every year since 2005, when World of Warcraft, its highly successful massively multiplayer online game (MMO), was barely a year old.

For BlizzCon 2013, more than 20,000 fans from all over the world converged at the Anaheim Convention Center. Some dressed up as their favorite characters, wearing elaborate costumes that took them weeks or even months to make. Others met with their online guilds. And a lot of them lined up to play two new games: Hearthstone and Heroes of the Storm.

Without knowing the language of Blizzard’s games, however, BlizzCon can at times be a confusing and impenetrable experience. It’s like crashing a cool-looking party, but you don’t know who anyone is or why they’re celebrating in the first place. So to find out more about what makes BlizzCon so special, I turned to the developers.

“For me, it’s really a chance to get to interact with players — just face-to-face and talk about things,” World of Warcraft lead system designer Greg Street said.

Street and I met on the second floor of the convention center, a quiet space so far away from the din below us that we might as well have been on the moon. For the press, the second floor is a compressed version of BlizzCon: an array of monitors show some of the live panels, we don’t have to wait in long lines to play the new games and content, and we get to speak with developers in 1-on-1 interview sessions. It’s efficient and it helps us do our jobs, but those rooms lack the oomph and energy you can only get while walking around downstairs.

“Whether it’s getting to hang out with people at a bar or running into them on the show floor, it’s just great to have that face-to-face communication you just can’t get on the forums or Twitter or something like that,” he said. 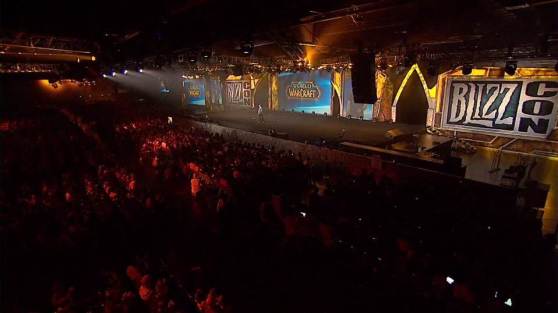 Hamilton Chu has been through three or four (he can’t remember exactly) BlizzCons already. The executive producer on Hearthstone revels in the energy and excitement that each convention brings, especially when watching fans react to new announcements and games.

“There’s this whole build-up of months and months,” Chu said. “The whole company gets ready. These [public relations] guys get ready. The events team is running around with their heads cut off and the dev team is getting ready. … It’s this kind of big, climactic, ‘Here is something that we’ve been working on!’ And hopefully people really enjoy that. That’s very rewarding, too.”

“This is our Super Bowl,” added the PR representative sitting next to us.

It’s an apt analogy. Blizzard unleashed its most dazzling products and personalities to entertain the fans who’ve spent so much time and money to get here: new games, famous e-sports players and commentators, contests galore, and all the Blizzard-related merchandise they can handle. And attendees were hungry for news. They proved that during the unveiling of Heroes of the Storm, a multiplayer online battle arena (MOBA) game that pits Blizzard’s most iconic characters against each other.

Thousands of people in Hall D erupted when the cinematic trailer first appeared on screen. Their collective cheers caught me off-guard and whacked me from behind like a tidal wave.

Blizzard wasn’t quite ready for that boisterous response, either. 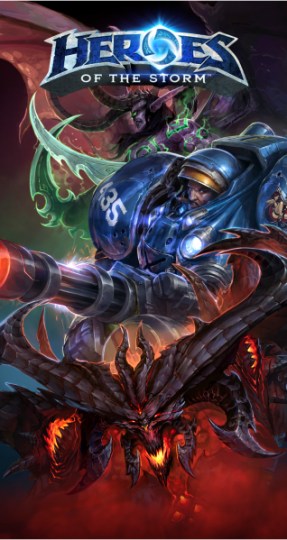 Above: Artwork from Heroes of the Storm..

“I practiced what I was going to say there 100 times,” said Heroes director Dustin Browder at a press-only Q&A session. “I’ve done so much public speaking that my blood pressure doesn’t rise at all. [But] I was scared for that one. And so I’m standing there backstage and … it’s a wooden stage. The whole thing is. I’m sure your guys’ seats in the audience were shaking. … And the stage is shaking and my nerves are rising and then Diablo steps onto the screen — and the audience goes nuts! This wave of sound crashes against me. … [I thought,] ‘I’m gonna die!’”

That moment set the tone for the rest of BlizzCon as fans tried to analyze what they just had seen or played. Shortly after the opening ceremony on Friday, I overheard someone telling his friends how different Heroes of the Storm was from other MOBAs and that the line to play it was already three hours long. At the same time, four guys behind me were dissecting the announcement of Warlords of Draenor (the new expansion for World of Warcraft) in MMO terms that I didn’t understand. Even the Q&A with Browder had questions filled with MOBA-specific jargon that flew over my head.

It’s hard to share that excitement when you just don’t know what they’re talking about.