Microsoft’s first tweaks for a new controller focused on the overall size and how it’d fit into hands, golden or otherwise. Using the Xbox 360 controller as a starting point, the engineers would make plastic-molded or 3D-printed prototypes that were each 1 millimeter wider or narrower than the last, testing a full range of up to plus or minus 8 millimeters. “That gave us the ability to test, with actual users including women and children, which width feels best,” said Morris. “We tested with more than 500 people throughout the course of the project. All ages, all abilities.” 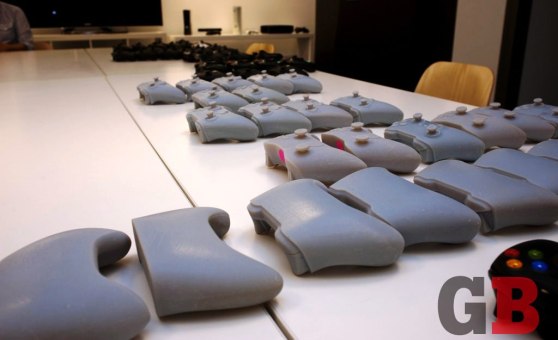 Above: A tiny sampling of the prototype controllers that Microsoft experimented with.

We’re pretty certain that an Andre the Giant type might have a different opinion on how beefy the controller should be compared to someone considerably more dainty. You’d think Microsoft would just take some sort of average to appease everyone, but that wasn’t really the case. “Ultimately, you don’t really get a definitive answer out of [these user tests],” said Morris. “You get a general opinion that points you in the right direction. It’s not so black-and-white as ‘this is the right answer for this attribute.’ You test each attribute to understand them, but … ultimately you’re testing [how everything comes together].”

Morris and his team then looked at different thicknesses and shapes of the grips (or “lobes,” as he calls them), plus the angle of the triggers, different styles of analog sticks, and more. You can see some of the different ideas in the pictures in this article, and we’ll discuss each component in more detail in the next few installments of this series.

Eventually, once the engineers narrowed down some of the options, they went away from solid molds and started building working models for testers to try out, using Xbox 360 controller innards to make them function with live games. “We knew that you couldn’t design a new controller without letting people play with it,” said Morris. “[A solid, mold-only] prototype would not suffice to let people experience what it was like.”

(Continued below, after the photo gallery) 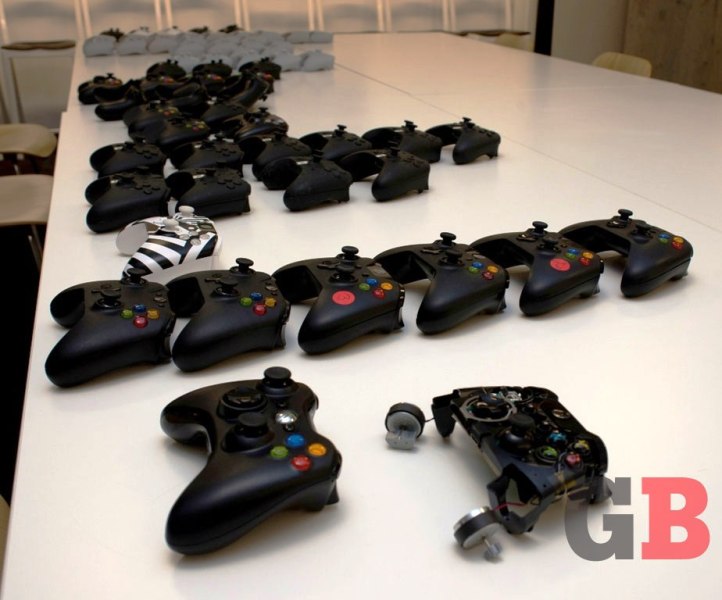 Above: Microsoft called this prototype the "Zebra" (guess which one we're referring to). It went out to third-party studios to playtest Xbox One games that were still very early in development. Its pattern is meant to represent a figurative camouflage since the controller was still top-secret at this point.

Mind you, they didn’t just look at them. They actually built all these as working prototypes. So yes, somewhere in Microsoft’s R&D labs exists an Xbox One joypad that can raise a literal stink. “We built small slugs of different types of smells that could actually come out of a controller,” said Alam. “Like, as you walked through a jungle, you’d smell the flora.”

Microsoft also built test controllers that has some features that its competitors are using now, such as a touchpad (PS4), camera (Wii U), and speakers (both). But “each one of these ideas fell down,” said Alam. Some of that is because the company’s philosophy toward the controller is the same as it is toward the console in general: The Xbox One and the television should be the two most important things in the living room, working together. “You’ve got a great TV with a better speaker than we could ever put in this controller,” said Morris. “And it made more sense to [not make players look down at a display], keeping the user’s attention on the TV. We really want them to be immersed in the experience that’s happening in front of them.” Plus, with an extra screen, “You’re burning battery life like there’s no tomorrow — not a great idea,” said Alam. 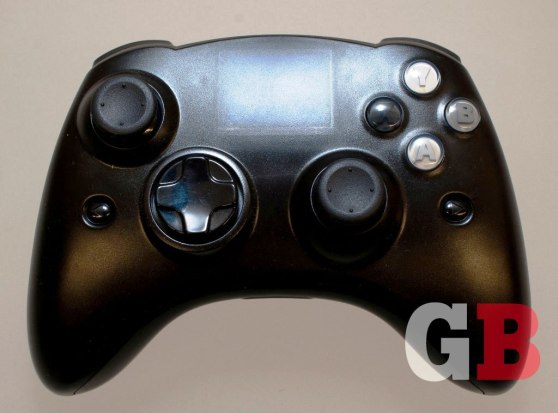 Above: This prototype has a small display screen in the center.

The camera seemed a little redundant, too, since each console comes with the updated Kinect, which already does what MS would’ve wanted a controller version to do. “It was one of our more extreme ideas,” said Alam. “Not only is it context-aware of what’s going on, it’s looking at you and picking up stuff like your heartbeat. You can infer some biometrics from cameras.”

And when Microsoft mentions displays, it doesn’t just mean an extra little screen on the joypad. It actually experimented with having a tiny projector which would beam out ambient visuals around the player. This was also nixed due to battery-life issues and Microsoft’s desire to keep gamers focused on the TV.