Your front door is about to get a lot smarter, prettier, and more-connected.

Back in May, home automation startup August announced the August smart lock, an inconspicuous but well-designed device developed in part by Jawbone’s Yves Behar. Bluetooth-enabled, the August smart lock lets owners send virtual keys to anyone with a smartphone, which August argues makes it more secure than traditional locks, not less.

Now, August has raised $8 million to help manufacture the device, which it hopes to start selling next Spring.

While there’s no shortage of smart locks these days, August CEO Jason Johnson told VentureBeat that August’s approach is special because it puts design at its center. Yves Behar, whom Johnson met at a TED conference, has designed a device that makes a statement while saying very little at all.

“What we wanted to do was create something that matches your existing door hardware and then blends in and disappears,” Johnson said. 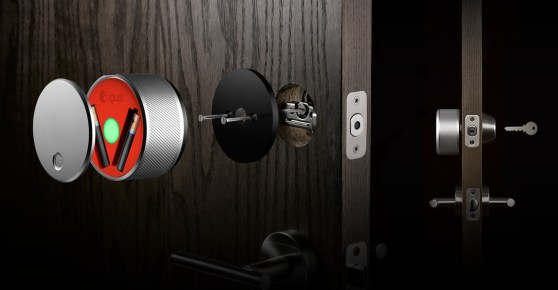 Above: The August smartlock exists more on the inside of the door than the outside.

Johnson says August plans to use the funding to not only bring the smart lock to market, but also to build out the August team and move into a new office (it’s currently working out of space in the Founders Den).

The lock comes at an interesting time for the connected device market, which is full of smart thermostats, smoke detectors, and even shade controllers. While some connected device companies would like to control the entire smart home, Johnson says August is content with just being a single node that can work alongside any other device. (The company says it will have more to announce on the partnership front early next year.)

August’s funding round, which was led by Maveron and joined by Cowboy Ventures, Industry Ventures, Rho Ventures, and SoftTech VC , brings the company’s total funding to $10 million.