Kano is launching a Kickstarter  campaign today to create a small computer kit that anyone can use to make their very own computer. 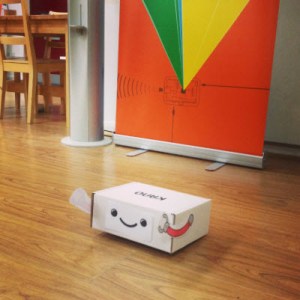 The London-based company’s mission is to give young people, or the young at heart, a simple and fun way to create something with technology and take control of the world around them. Kano is seeking $100,000 via its crowdfunding campaign on Kickstarter.

The kit will cost $99, powered by a Raspberry Pi Model B computer, a cheap Linux-based computer that has sold well to computer hobbyists. Call it Raspberry Pi For Dummies. Real dummies, that is. Or people who don’t have a computer science degree but want to build something cool.

The Raspberry Pi Model B sells for about $35, but Kano is more expensive because you get everything you need, including a keyboard, SD memory card, makeable casing, case mods, an operating system, games, a do-it-yourself speaker, and books that show you how to create projects with the Kano. Kano lets you play games, get on the internet, talk to friends and do whatever creative projects you want.

Alex Klein, Saul Klein, and Yonatan Raz-Fridman started the eight-person company so that anyone, anywhere, could make a computer. Saul Klein is a partner at Index Ventures, a venture capital firm.

The challenge was set by Micah Klein, a 7-year-old, who wanted something like LEGO set that he could build by himself. Kano will let people build a computer, make games, synthesize music, learn code, and more. All the while they are learning, they can also unlock challenges and level up. The team hopes to ship the computer to Kickstarter backers next summer and then launch the machine in stores. 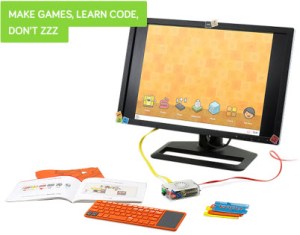 The company got started on the project in January, with the goal of making the Raspberry Pi more accessible. The founders developed their kit by working with parents, educators, and children around the world. They also collaborated with Raspberry Pi and Codecademy, which teaches people how to program. Raspberry Pi founder Eben Upton is an advisor.

Kano made 200 kits and sold them out based on word of mouth in London schools and at some big companies. During the past year, the company spent its resources making the design better, creating its own Raspberry Pi operating system, hardware add-ons, and making a plug-and-play design. The company and product are named after Kano Jigoro, the founder of judo. The company has been funded via friends and family so far.