Of course, that 4-player switch that gave my multiple Marios such a hard time is a piece of cake in Super Mario 3D World’s amazing multiplayer mode.

For the first time in a 3D Mario game, Nintendo is giving gamers the option to run around and jump on goombas with up to four total players simultaneously. I doubted this would work in 3D, but it does, and I can’t wait to play it more.

I put in a few hours with my wife in two player mode. She took the Wii U GamePad and I took a Wii Remote (ugh). We hopped from stage to stage picking up green stars I missed my first time around. We’re both pretty sensitive to in-game cameras that feel out of sync with what we’re trying to see, but neither of us had any complaints.

Very occasionally we’d try to run in different directions. In these moments, the camera pulls out a little bit while following only the player that is moving the furthest ahead. If a player gets left too far behind, they get snapped up in a bubble and dragged ahead. That only happened to us a couple of time.

This camera system works, and it in no way stopped us having an absolute riot. 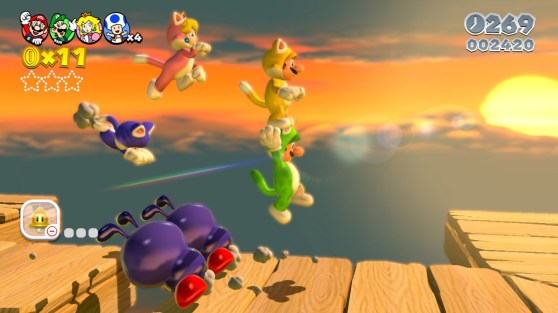 Above: Multiplayer co-op works, and it is a blast.

Very quickly, we got into a groove with each of us calling out who would hit difficult switches, who would go for the kill on tough enemies, and who needed the cat suit the most. Occasionally, one of us would accidentally grab the other one and throw them off a tiny platform, but it’s easy to jump out of that if you want to. I would usually just let her throw me (she swears she didn’t mean it) because it was cracking us up.

I love this mode so much. I actually ordered another Wii Remote to make sure that I have enough for when family is over so that we can play four players this holiday.

The look and sound

Super Mario 3D World is one of the best looking games on any platform. I think it’s better looking than Knack on the powerful PlayStation 4, and it only can’t keep up with ultra-realistic titles like Battlefield 4.

Of course, that’s more to do with aesthetics than polygons and graphics engines, but who cares? Nintendo finally has the amount of power it needs so that nothing is holding back its production values. The company’s artists and animators finally have the high-definition canvas so that no details are lost in translation.

The quality of the visuals are apparent from the first stage, but again Nintendo doesn’t hold back with variety. While the game follows the pattern of other Mario titles where the first world takes place in the Mushroom Kingdom, the second is a desert, and the third is an ice world, the levels within those worlds don’t necessarily fall into those themes. Instead, each stage surprises with new design and graphical flares

One early stage that especially stood out has the characters running through a very overgrown jungle with just tiny cracks of light slipping between the branches. It’s something new for Mario, and it really helps to keep things interesting. Another takes place on a tropical beach with gorgeous shimmering water and goombas lounging on inflatable rafts.

Likewise, the final world — which is a surprise — isn’t what you’re expecting, and its levels are one visual treat after another. 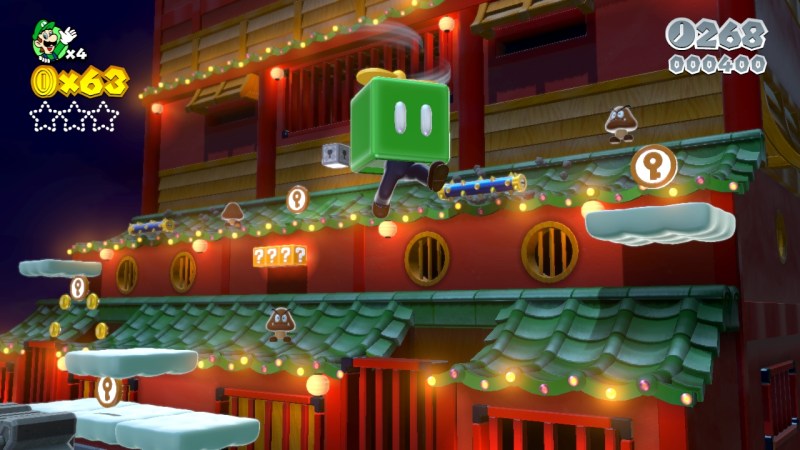 Super Mario 3D World’s music is also simply better than everything else.

Nintendo went all out with the orchestra, and the composers found a perfect balance between bringing back nostalgic favorites and recording swingin’ new jams.

I’ve already set 3D World’s theme as my ringtone, and I don’t think it’s left my head since I first booted up the game. It’s not just that the music is delightful, it’s that it fits with the world and the gameplay. Several times I felt like the swells and crescendos of the soundtrack was perfectly syncing with the sounds of my jumps and koopa-troopa kills.