Russia is not enough for Mail.Ru.

“Globally, there are not too many countries where local players are winning the market, but in Russia we are more popular than Facebook or Google,” CEO Dmitry Grishin said in an interview with VentureBeat. “Mail.Ru showed people that Russia has huge potential as an interesting market. We thought a lot about our next move, and realized to be successful globally, you need to compete with the best players, and the U.S. market is the most competitive.”

Mail.Ru is one of Russia’s great tech success stories. The site includes a search engine, e-mail provider, news source, social network, and gaming portal. It is the 32nd most trafficked destination on the Internet and ranks sixth in the world for unique visitors. It has a market cap of over $8 billion, made $650 million in 2012, and has 100 million monthly users in the Russian speaking world.

With all this success, Mail.Ru’s leadership began considering opportunities outside of Russia’s borders. It already has a strong hold on the Russian market, and Grishin said global expansion is important when thinking about the long-term success of the company.

Mail.Ru decided to set up shop in Silicon Valley and target American users. 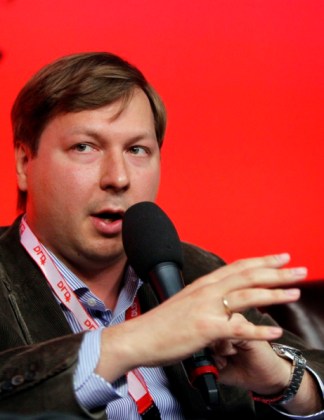 “We understand that this is hard and there is significant competition, so we are using the startup approach,” Grishin said. “We think it is important to create a product, see how people react, see what needs to be changed, and then advertise it. My.com products combine communication and entertainment, and we believe this idea of ‘communi-tainment’ will be powerful.”

MyMail is mobile e-mail client that connects to your existing email accounts. Grishin said the options in the U.S. for e-mail apps are limited, and myMail aims to stand out by having more customization features. Users can receive real-time push notifications about their e-mail, and the app offers a strong set of controls for dictating what notifications you want to receive and when.

For example, you can turn off all push notifications at night while you are sleeping or decide you only want to get Facebook notifications during the day. MyMail also puts avatars or company logos next to every message in your inbox.

MyChat is a messaging app along the lines of WhatsApp, where you can chat all your friends from your contact list, Facebook account, etc. The chats have options for voice and video calls as well. Users can also jazz up their communiques with stickers and emoticons.

Mail.Ru is launching several mobile games that are free to play, and the goal is to use the gaming apps to promote the communication products. Its Jungle Heat game’s already available in the U.S. and has over 2 million downloads.

“When people communicate with each other, they want to have more fun,” Grishin said. “Together, all of these products can help each other grow in the future, promote user engagement, and drive traffic.”

There was nothing particularly mind-blowing about any of these apps. During the demo, they seemed easy to use, but to make a dent in the U.S. market requires more than putting a polish over email clients and messaging.

However, security is also a factor here. My.com’s global headquarters are in the Netherlands, which is where the servers will live, and this could be a selling point for people worried about the NSA spying on their communication.

Mail.Ru was founded Russian billionaire Yuri Milner. Mail.Ru was an investor in Facebook and owns 2.4 percent of that company. It filed for an $876 million IPO in 2010 on the London stock exchange.

Grishin joined as a cofounder in 2005 and assumed the role of CEO in 2010, taking over from Milner. He is also the founder of Grishin Robotics, a firm that invests in personal robotics startups.