Today marks the 15th anniversary of the first component of the International Space Station being sent into orbit — the beginning of one of the most complex and ambitious engineering projects ever attempted.

The ISS’s construction involved contributions from the United States, Russia, the European Space Agency, Canada, and Japan. It required more than 100 rocket and space shuttle launches, 160 spacewalks, and cost an estimated $100 billion before it was completed in 2011. Though the station’s full potential as a scientific research facility is only now beginning to be realized, its completion and continued operation 15 years later are key milestones.

Construction began on November 20, 1998 when then Russian-made Zarya Control Module was launched (the first of many pieces to be sent into orbit). The name Zarya, which translates to “dawn” in Russian, was meant to signify the dawn of a new era of international cooperation in space. The first American-built component of the space station, Unity, quickly followed on December 4, 1998. After nearly two years of assembly, including the addition of the Russian Zvezda (Star) module, Astronaut Bill Shepherd and cosmonauts Yuri Gidzenko and Sergei Krikalev became the station’s first crew members in October 2000, living in space for just over four months. 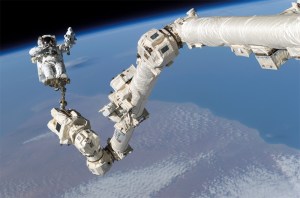 Above: Astronaut Stephen K. Robinson anchored to the end of Canadarm2

Over the next several years the station continued to expand, with the U.S. adding the Destiny laboratory module and Canada installing the Canadarm2 robotic arm in 2001. On February 1, 2003, however, construction was halted following the Columbia disaster in which the space shuttle disintegrated during atmospheric reentry, killing all of the astronauts onboard. Efforts to continue building the station would not resume for nearly three years, until the space shuttle Discovery returned to deliver supplies and test safety procedures in July of 2006. In 2008, the space shuttle Atlantis delivered and installed the ESA’s Columbus laboratory and on November 2, 2010 the station celebrated its 10th anniversary of continuous human occupation.

The station also witnessed the end of an era in American space flight. In February 2011, the space shuttle Discovery launched its final mission to deliver the Leonardo Permanent Multipurpose Module. Inside the module was the Robonaut2, a humanoid robotic torso designed to assist in spacewalks and station repairs. On July 8, 2011, the last space shuttle launch sent the Atlantis orbiter to the ISS to complete construction and deliver supplies, drawing the 30 year American space shuttle program to a close since the first shuttle launch in 1981. Though the station is officially complete, there are numerous additions planned that will further expand the ISS.

Scientific research aboard the orbital laboratory only began in earnest over the last couple of years following the station’s completion. It has already served as a zero-gravity environment for over 400 scientific experiments in fields ranging from biology, human physiology, oncology, physical, and materials science — as well as Earth and space science studies, naturally. In April 2013, the space station’s cosmic ray detector (Alpha Magnetic Spectrometer) observed particles that scientists believe could confirm the existence of dark matter. The station has also housed research for the next generation of cancer treatment drugs and will get its own 3D printer in 2014.

The ISS’s greatest potential for scientific study, however, is observing the long-term effects of living in space on the human body. Researchers hope to learn more about how the low-gravity environment affects things like vision, cardiovascular function, bone density, and muscle loss. Other problems, like the potential dangers of cosmic radiation and the mental stress of life in space for extended periods, must be studied before astronauts can be sent on missions outside of low earth orbit to asteroids, Mars, and beyond. In 2015, an American Astronaut and a Russian cosmonaut will live in space for an entire year aboard the ISS to further study the effects of space for long periods on the human body.

Much like the torch, the International Space Station has come to represent the spirit of international cooperation. Though it has only been 15 years since this remarkable project began, it stands as one of the most significant projects ever completed in the history of space exploration.

Robyn Johnston has an unequalled passion for science and technology, and has a desire to share it through her writing. When she isn’t writing, you’ll find her focusing on her studies.