I’m new to the Forza series, and I’ve never really spent any time with a racing sim. I own a car, but it’s a 2004 Hyundai Sonata. I love BBC’s Top Gear, but I couldn’t name most parts that make a car actually work. I enjoy speeding, but I’ve only watched maybe one televised auto race in the last 10 years.

The truth is that I’m hopeless when it comes to cars, but despite my handicap, I really like Forza Motorsport 5.

This review probably isn’t for long-time fans of the series. If you’re just a regular gamer looking to pick up a game or two with your shiny new Xbox One, however, I think I can help  you.

The cars and the driving

I never really thought I would get the hang of driving a powerful car in a game like Forza. Racers like Mario Kart and Burnout taught me that Sir Isaac Newton didn’t know what the hell he was talking about. My issue is that I don’t want to play with too many assists on. What’s the point of playing a simulator if the assistance is going to break immersion for me? That stubbornness led to two things in Forza: About 400 fender-benders and a gameplay breakthrough.

Forza’s controls and physics are very precise, but the game features a rewind system that you can engage at any time to undo a mistake. This enabled me to slowly start piecing together what both the cars and I were capable of in different circumstances. This gimmick — which I understand was in previous Forza games — made real-world racing more accessible to a rube like me.

I still have to rewind a few times every race, but I’m miles better than my first few hours where I was rewinding every turn.

Now, for the most part, it’s just me, the track, the top-notch physics, and the other drivers taking the course one turn at a time, and it feels so amazing. It is incredibly satisfying to nail a turn and speed between two opponents. Forza 5 only makes it better by awarding you bonus points for “perfect passes.”

The inclusion of Drivatars also helped keep my attention. These are computer-controlled opponents that are based on the tendencies of other players. Developer Turn 10 wisely chooses to keep your single-player games populated with your friend’s Drivatars, which helps to build imaginary rivalries.

All of these elements combine to create some high-drama action. I want to win, and I want to take every corner better than the other guy. I don’t know if the game was really using my friends’ tendencies or not. I don’t actually care. Just reading the name is enough for me to build everything up in my head.

At this point, for me, every turn in Forza is a story. I’ve raced against these Drivatars for the last 15 hours, and we’ve moved past trash talk into pure loathing. When I see one of the drivers take a sharp corner, I know that he leaves the outside open, and I can usually take him. When it works, it is a great feeling. When it doesn’t … well, that’s what the rewind button is for.

I’m into Forza now. This is a really good racing game, but that doesn’t mean I want to start working on my garage or tuning up my cars. Those options are available for you gearheads, but I just want to jump from race to race quickly. Thankfully, that’s exactly how Turn 10 handles the career.

Forza 5 has a few dozen different kinds of racing leagues that you can take part in. When you select one, like Early Hot Hatch for example, the game helps you pick an eligible car (the Volkswagen Golf GTi, of course) and then funnels you from event to event until you’ve finished the championship series. You don’t have to repair your cars or buy parts to turn up stats to stay in competition. It’s just one good race after another, and I love the way it keeps things moving.

The top-notch presentation and visuals

When the action does slow down for a moment, it’s usually only to let one of the co-hosts of Top Gear wax poetic about a new class of cars you’re about to experience for the first time. Top Gear is a BBC television show about cars hosted by Jeremy Clarkson, Richard Hammond, and James May. It has transcended its intended audience and is an absolute breakout hit — and for good reason. Clarkson, Hammond, and May have the ability to talk about cars in a way that can get almost anyone excited and nostalgic.

The rest of the presentational package isn’t too shabby either.

Menus are big and pretty. The pre- and post-race segments make the cars look amazing while giving you all the information you need. 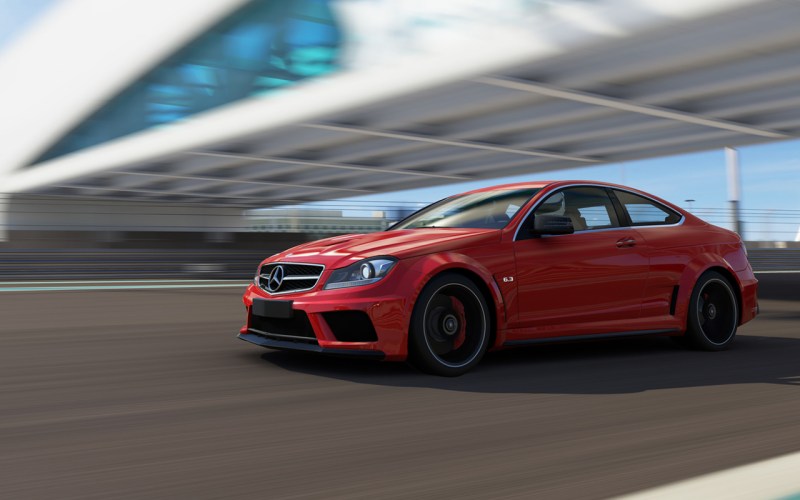 Above: Forza 5's damage engine is entertaining to witness, but clean driving will benefit your Drivatar best.

The game engine also looks nice and runs well. These auto-racing sims are going for photorealism, and Forza 5 doesn’t quite deliver that — but it’s one of the better looking launch games. The cars look shiny and detailed. The tracks pop with super high-resolution textures, and it all flies by in 1080p at 60 frames per second.

At first, I was happy that I only needed to learn a few tracks, but it is a bit disappointing after a while to hear the announcer reveal that you’re heading back to Sebring International Raceway for the eight time.

The game boasts 14 tracks, and while that’s quite a bit, they get thrown out in heavy rotation. It doesn’t help that Forza throws you into one race after another, so that you can’t help but chew through all the content in huge chunks.

I can’t really hear the music during the race; I’m in the zone.

When a match is over, however, Forza 5 always plays the same dramatic tune, and while it was cool the first time, it does get on my nerves a bit. I would’ve replaced it with my own music, but Xbox One doesn’t really support that yet.

Forza 5 is a fine way to spend a console launch. I’m not all that into cars, but I found an exceptionally built game that is welcoming to rookies.

If you’re that guy standing in line at Target looking for a game to buy for the Xbox One at launch, I wouldn’t hesitate to recommend Forza.

Forza 5 is out Nov. 22 for Xbox One. Microsoft provided GamesBeat with final pre-release code for the purposes of this review.