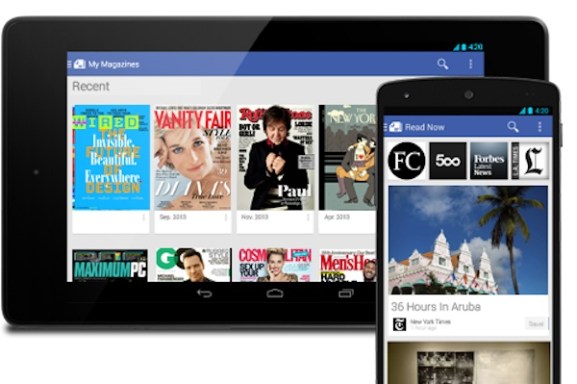 Google is doing some consolidating when it comes to its various news services.

Today the company announced that it will merge its Google Currents mobile news application and Play Magazine app into a new Google Play Newsstand service. Essentially, this is Google’s version of Apple’s relatively successful Newsstand app, with some added features.

With Play Newsstand, you can purchase magazines and newspapers as well as access monthly subscriptions. The article layout design is optimized specifically for viewing on tablets and smartphones, as you’d expect. And all the content you’ve added to the Play Newsstand app will automatically download so you can view it even when there’s not a reliable Internet connection — something that might be appealing to the crowd that typically still prefers to read the news from printed publications (aka bloody savages).

You can also bookmark your place in longer articles and sync up all your data between multiple versions. But perhaps the biggest difference between Play Newsstand and Apple Newsstand is that it will actually pull in articles from digital publications and news blogs — thus aiming to be a complete news service.

The mix of paid and freely available news content could make for an interesting development for major publications moving from print. Some major publications already offer more in-depth content through a regular print edition while also supplementing shorter news pieces within ad-supported blogs and other digital content. (For example, if Play Newsstand is successful, we could see readers in a position where they’re properly enticed to sign up for a subscription after following the free digital news from a publication.)

Users with Android devices will be the first to gain access to the new Play Newsstand app, as both Play Magazines and Currents will prompt users to upgrade. For now it looks like the Currents app (which competes with Flipboard, Pulse, Zite, and other digital magazine apps) will remain available for the foreseeable future. Google also planning to bring the Play Newsstand to iOS some time in early 2014, according to Engadget.

Check out the demo video embedded below for a closer look at the new app.