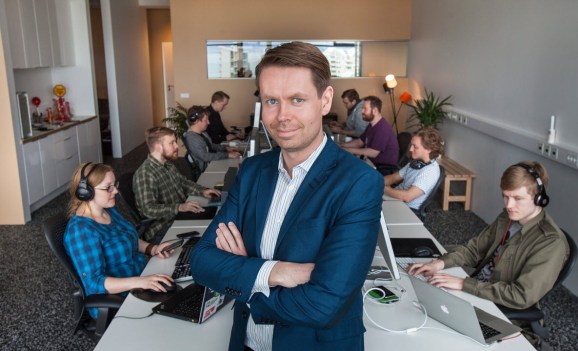 Plain Vanilla Games, the creator of the QuizUp iPhone game that it calls the “biggest trivia game in the world,” has raised $2 million in a new round of funding.

Plain Vanilla raised the money from eVentures and Sequoia Capital just a little over a week after it launched its mobile trivia title, which has more than 100,000 questions in 300 categories. The free-to-play game hit No. 1 among free apps on the iTunes App Store, with more than 1 million downloads and 60 million plays. The company says players are playing more than 5,000 matches a minute.

“We are delighted to see the phenomenal reception of QuizUp,” says Thor Fridriksson, founder and CEO of Plain Vanilla Games. “Engagement is going through the roof, people are playing, chatting, and adding friends at a rate that is way beyond anything we anticipated. We are gratified by the enthusiasm and support of our investors and this provides a great vote of confidence for our mission to help connect people from around the world through shared passions and interests.”

Fans can contribute questions and have already submitted thousands. The title blends human interaction between friends and strangers with gameplay in a seamless way. In QuizUp, players can play trivia games individually or asynchronously (where one player takes a turn at a time) against another player. Players can issue direct challenges to friends via Facebook connectivity or allow QuizUp to match them up with a similar opponent.

“I loved Trivial Pursuit as a child, so I was drawn to Thor’s marvelous vision of developing a trivia network on mobile that thoughtfully integrates social features,” said Roelof Botha, partner, Sequoia Capital. “QuizUp taps our desire to learn, keep in touch with friends and connect with strangers who share our niche interests.”

“We anticipated the run-away organic growth of Plain Vanilla’s QuizUp app even before it launched. It was obvious to us that there were no similar apps on the market with this level of depth and virality,” said Mathias Schilling, eVentures cofounder and managing partner. “QuizUp is simultaneously addictive and educational, with 250 topics ranging from sports to the arts. We believe Thor and his team will make a substantial impact on the market.”

Plain Vanilla was originally founded in Iceland by Fridriksson shortly after he finished his studies at Oxford University. Its first project was a children’s entertainment app for iPad called Moogies. That game was published by Chillingo in late 2011. It got good critical ratings, but it wasn’t a commercial success. In early 2012, Plain Vanilla was almost out of money. But the team came up with its idea for QuizUp. They tries to get backers in Iceland but failed. So they moved to San Francisco, where they raised $1 million in a seed round in the summer of 2012. In March, they raised another round.