We gotta admit — if you were to ask us to figure out how to improve the Xbox 360 controller’s face and shoulder buttons, we’d have no clue. They all seem pretty good as-is. That’s why we’re not engineers and designers at Microsoft. Those folks actually did find a way to upgrade them for the Xbox One console that’s due out Friday.

The tweaks to the face buttons are pretty minuscule, though they were made to appease the more hardcore gamers out there. What may surprise you, however, is just how much money Microsoft spent on just making them look the way they do. The triggers, on the other hand, went through a major redesign and are much improved in various ways. Like we wrote yesterday in part two with the analog sticks — we wouldn’t want to go back.

Here’s what we learned in our exclusive inside look at the Xbox One controller.

Microsoft tightened up the spacing between the X, Y, A, and B buttons just a hair for the new joypad, mainly for the competitive scene. “We got feedback that some gamers would like the buttons to be closer together,” Xbox’s senior industrial designer Quintin Morris told GamesBeat, “to cut down on the time it takes for your thumbs to travel between them.” We don’t have “golden hands,” so we can’t really appreciate such a seemingly minor adjustment. But it does show that Microsoft is looking after the hardcore crowd.

Above: Microsoft literally spent millions of dollars to get the letters to pop just right on the buttons on the Xbox One controller.

For more casual gamers, Microsoft went through a lot of trouble to redesign the look of the face buttons to make them stand out a little better. “We find that a lot of people read color first and then letter second,” said Morris. “If your friend’s saying, hit A, what you see is green. You don’t necessarily see A on the first read. We wanted to make those keys equally readable from a letter and color point of view.”

On the 360 controller, the buttons and their respective letters are almost the same color. The green button has a slightly lighter green A sitting on top, the red button has a slightly lighter red B, and so on. Microsoft said the process to create this two-tone effect is called a “double shot” — and that just wasn’t enough for what the designers had in mind for the Xbox One controller. “We wanted to go with the idea that the letter is sort of hovering, almost in three dimensions,” said Zulfi Alam, general manager for accessories at Xbox. “To do that, you need a triple shot. This technology only existed in a very rudimentary form, so we invested millions of dollars trying to get this thing right. It’s a seemingly small thing, but we said, ‘Hey, let’s do this right.'”

The triple shot creates three separate colors in three different steps: a black base, a colored letter on top, and then a clear layer enclosing the whole button. “By going to this triple-shot technology,” said Morris, “we were able to make the letters stand out better while still representing the colors — and overall improving the appearance of the [controller]. Every little detail was considered.”

The letters are definitely more distinct and readable now but at the cost of a solid color enveloping an entire button — you definitely see less blue, yellow, green, and red now. This may be a big positive for color-blind users, but did Microsoft take it too far in the other direction? “Possibly, yes,” admitted Morris when we asked about this. “But with Xbox One, we have a new spec and way of indicating how these letters are represented onscreen that’s in line with the design of these. It should tie both of those things — the physical artifact and the digital experience — together better. A lot of that trouble happened more for the casual gamer, someone who wasn’t so in tune with the intricacies of A versus green. For those people it’ll become way more clear and a lot more intuitive.”

We never noticed until Morris pointed it out to us, but the old LT and RT buttons aren’t quite lined up with your index fingers in a natural, comfortable manner. “You’ll see on the Xbox 360 controller that the triggers and bumpers are orthogonal,” he said. “They’re totally straight up and down. But when you hold the controller, your hands aren’t. Your index fingers actually lay down at an angle.”

Go ahead and grab your 360 joypad and see for yourself. See how your index fingers don’t point straight at each other but rather slightly downward? They don’t rest at a 90-degree angle to the triggers. 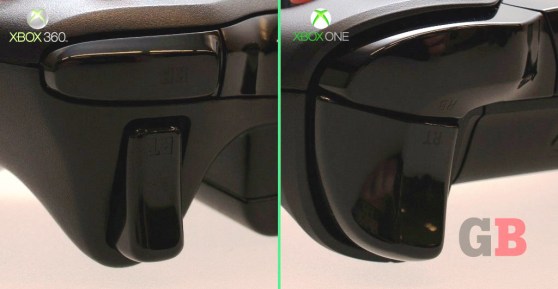 Above: The new triggers fit more naturally with your index fingers.

“We realized that to make it more ergonomic,” said Morris, “if we angled the triggers and bumpers to match the angle that your fingers fall on, you can make that experience of pressing them more natural and easier to do. It’s about reducing effort and increasing your ability to hit these buttons with less fatigue, thus making you faster and able to play longer.”

Microsoft’s engineers not only turned the triggers slightly outward to match your finger position, but they also fattened them to slope down on the sides. So instead of having a relatively small and boxy button to pull, your fingers would just naturally wrap around a larger, smoother surface with more subtle angles. “You want to have a nice, soft approach to the face of the trigger,” said Morris, “but still provide a tactile ridge that allows you to feel where the trigger face is.” 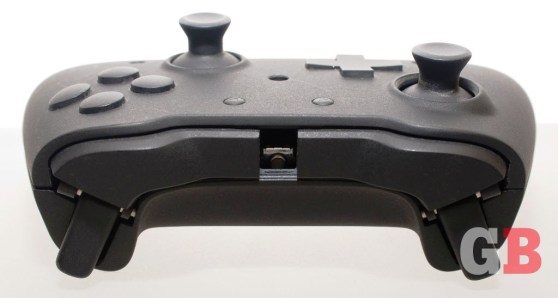 The pull of the trigger is a lot smoother now as well — it almost makes the 360 ones feel cheap by comparison. It’s consistent throughout the motion, and Microsoft brought in some new innards to complement that. Precision magnets now read the exact positions of LT and RT. According to Morris, this provides for a wider, more accurate range of data and translates into better response times as the controller can sense sooner when you start to pull the triggers.

The company also placed the LB and RB bumper buttons right next to LT and RT — they’re no longer separated by a small strip of plastic casing. “The whole idea was, ‘Hey, how can I transition between bumpers and triggers as soon as possible? How can I make gameplay better, faster?'” said Alam. “You can move back and forth more easily. It’s probably only shaving hundredths of a second, but it’s good. It’s important.”