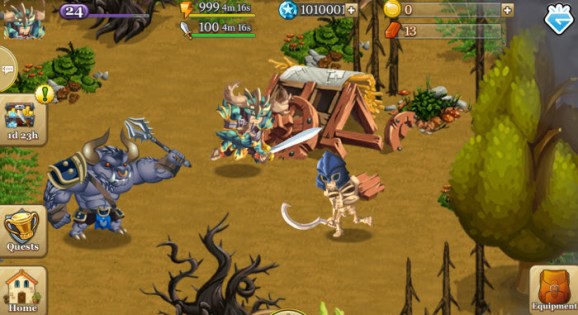 Despite the hardcore name, Epic Empire: A Hero’s Quest is for light players who snack on games, not hardcore or midcore gamers who feast for hours at a time. Pocket Gems developed this free-to-play game in San Francisco, and it has a lighter, cartoon-style look.

A Hero’s Quest is a player-versus-player role-playing game in which merciless bandits and barbarian raiders prey on each other. The player’s job is to restore the balance in the kingdom. Players collect equipment such as swords, steel, shields, and other gear so they can battle bosses in active combat. Bandits become more powerful, so players have to band together and strengthen their armies by forging new armor from old gear. Players move through procedural dungeons, which are unique but are self-generated, to find new stuff for crafting.

“I’d classify this as a casual role-playing game,” said Ben Liu, the chief executive of Pocket Gems, in an interview with GamesBeat. “We want it to be accessible. We’ve never been a company that follows a trend. We want to bring new things to mobile. We have an established audience that likes this kind of game.”

The goal was to take RPGs and make them more accessible to a casual audience, said Niels Hoven, the head of product development, in an interview.

“This game was built for players who love Paradise Cove,” Hoven said. “It is for a more mature audience, with an equal split between men and women. The core fun is about customizing a character and having fun in battles.”

Founded in 2009, Pocket Gems has 175 employees and it is profitable. It has had more than 150 million downloads and it has few million active players. Paradise Cove has been in the top 50 ranks in mobile games for two years. The company had four games in the top 100 list on iOS last year. Liu said the company spent about a year making the title.

Liu said the bar for quality is going up in mobile games and that it’s critical for new games to match rising expectations among players.

One of the mechanics that is most popular in Paradise Cove was “ship crafting.” Epic Empire was born out of that. Liu said that Pocket Gems always tries to make its games easy to understand and operate via a touchscreen.

Epic Empire: A Hero’s Quest debuts today on iOS first and it will hit Android later.