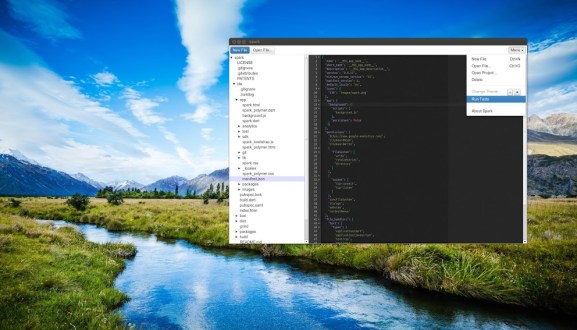 Google is building a Chrome-based development environment, code-named Spark. The IDE would function as a Chrome app on a Chromebook and would enable developers to build apps for Chrome faster and easier than they can currently.

As Google France employee Francois Beaufort notes, Spark has a public GitHub repository where Google is building the app, and Google engineers are using Dart, a “new language for scalable web app engineering.” Dart is a class-based and object oriented language that compiles to Javascript to build and run web apps — which is essentially what Chrome apps are.

And, he says, it contains a graphical user interface library powered by Polymer, a pre-alpha “only for the daring” library that includes a set of user interface components for building web applications. That likely translates into what Google is calling the “Spark Widget Library,” a set of GUI components that app developers can draw from as they build apps.

The app is clearly under active development, as components have been updated as recently as a minute ago, as I write this, with regular commits days, weeks, and up to a month ago. And the repository is clearly in a fairly raw state, with typical developer misspellings such as “impromevents” in the commit comments.

As The Next Web says, it’s not clear right now if this is a project that Google will actually officially support, or a playground for a couple of Google engineers to mess around in.

But if it’s a project that Google will eventually support, this shows significant progress towards a way to simply create Chrome apps. Chrome apps are a little bit more than web apps as they have access to local Chrome APIs, meaning that you can build desktop-class applications with little more effort than web applications, including resource-intensive apps that can’t have the latencies you might typically find online, such as music and video editing apps.

I’ve asked Google for a comment on Spark and will update this post when the company responds.