Email is somewhat of a lost cause in the eyes of many people who get far too many messages to sort through on a computer screen in a single day. However, that could be because we’re just using the wrong device.

Take for instance email service startup Boxer, which has focused all its efforts on building an iOS app that takes full advantage of mobile devices to sift through a glut of messages quickly and easily — probably in a fraction of the time it would take on the desktop. The app itself utilizes finger swiping gestures to flick emails into the appropriate folder, helps prioritize the most important of those messages, and a series of quick, generic responses that’s much more efficient than typing even two sentences with your thumbs. It’s fair to say Boxer’s app is a more feature-rich competitor to last year’s tremendously buzzworthy mobile email app Mailbox.

Today the company is rolling out a new iPad version of the Boxer email app that brings the quick message sorting, responding, and prioritizing features to a larger touch screen. The version is free to those that have already purchased the premium version of the app, and can be accessed after downloading the latest update. Those who are new to Boxer can purchase the app (currently on sale for $0.99, down from $5.99) in the App Store, which works natively on both the iPhone and iPad. There’s also a free lite version of Boxer that has fewer features than the premium app.

“Composing emails is probably the biggest difference you’ll notice on the iPad version,” Boxer CEO Andrew Eye said in an interview with VentureBeat. He added that adding Boxer support to iPad has consistently been the biggest request from users since its initial launch.

“People in sales that are traveling constantly don’t bring a heavy laptop with them on the road. They usually have an iPad and a Logitech keyboard accessory to respond to client email and communicate with messages to the rest of their team,” Eye said. “So optimizing the app for the bigger tablet screen will really enhance the experience for that base of Boxer users specifically.”

Eye said the new iPad version of Boxer will hopefully increase the number of times people are checking their inbox throughout the day, and help eliminate the headache of messages that tend to pile up if you don’t constantly stay on top of them.

“I’ve completely stopped checking my inbox on the computer. It just seems too slow for the majority of what I need to do,” Eye said. (It’s worth noting that I do feel like a caveman when digging through my inbox on the desktop, which I attribute to Boxer.) “And when I do get on the computer to open my inbox it’s because I’m writing a long email to someone. But even that doesn’t feel like email now. It’s more like writing a letters or document.”

In addition to the iPad version launch, Boxer is also making the email service much more useful for people who rely on task management and note-taking services. Today’s update brings new integration with Evernote and Sanebox. And while not officially rolling out, the Boxer team is also working on integrating with Salesforce as well. Boxer already has support for cloud storage services like Box and Dropbox to give users access to their full library of files as well as integration with social networks like Facebook and LinkedIn to better manage contact information.

The Austin, Texas-based startup has previously raised $3.8 million in funding to date, and has plans to launch an Android version of its email app in the near future. Check out the screenshots below for a closer look at the new Boxer iPad app update. 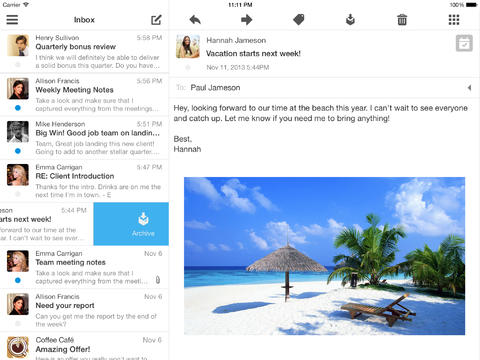