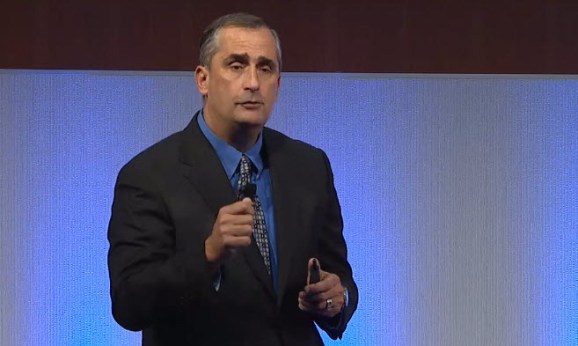 Intel’s new chief executive Brian Krzanich promised today that the world’s biggest chip maker won’t be left behind. The chip giant is no longer wed solely to the PC. It is also moving as fast as it can into smartphones, tablets, the Internet of things, and enterprise platforms.

That’s a pretty big admission. Krzanich said Intel is embracing tablets, even though it hasn’t led the way in components for such devices. Intel will focus on innovating and bringing tech to the market quickly. That includes being a foundry, or contract chip manufacturer, for other companies that design innovative components. That means Intel will build chips based on the rival ARM architecture, if that’s what customers want.

The shift is an admission that Intel — which has been driven to innovate for decades on the foundation of Moore’s Law, the 1965 prediction by Intel chairman emeritus Gordon Moore that the number of components on a chip will double every couple of years — has failed to adapt fast enough.

Krzanich made the remarks at the beginning of Intel’s analyst day event in Santa Clara, Calif. He said Intel will make devices for all operating systems, including Android and Google’s ChromeOS.

Of course, Intel is still targeting making $13 billion in net income in 2013. So the pain it feels in this transition is relative. Other companies would love to be in such an identity crisis.

Andy Bryant, chairman of the board, was also blunt in introducing Krzanich. He made it clear that Intel has fallen behind.

“We seemed to have lost our way,” he said. “We were in denial on tablets. It put us in a hole and we had to catch up.”

Intel’s board decided it needed change, someone capable of driving that change. After a six-month CEO search, the company replaced outgoing boss Paul Otellini with Krzanich in the spring. Krzanich appointed Renee James as president of the firm.

“We have seen meaningful change at Intel,” Bryant said. “The impact on the company is being felt. This is just the beginning. There will be more to come.”

Intel is also focusing on devices for the sensor-rich Internet of things, including the Quark chip for embedded devices. Intel is going to focus not just on silicon, but also on platforms for the enterprise that deliver that silicon, Krzanich said.

“Our view is the PC market is seeing signs of stabilization,” he said. “It has declined, but the decline has slowed down.”

The PC market is mature for both businesses and consumers.

“What we need to watch is the emerging markets,” Krzanich said.

In mobility, 2013 was about Intel building a “footprint.” Intel is getting its feet wet in tablets with new chips such as Haswell.

“We were nascent in tablets, allowing that market to grow up around us,” Krzanich said. In 2014, Intel’s goal is to quadruple its volume to more than 40 million units for tablets. Intel-based tablets will span the market from sub-$100 systems to $400.

Intel is also focusing on the big players in mobile phones, developing silicon for them rather than a broad set of suppliers.

Bryant said Intel was racing ahead of rivals in developing 14-nanometer and 10-nanometer manufacturing technologies and that makes Intel a more logical choice for chip designers. Those designers will use Intel as a foundry, or contract manufacturer, to make their own chips.

“Intel’s business model hinges on [factory] capacity, and there was always a question on just how much they needed to bring in outside designs,” said Patrick Moorhead, analyst at Moor Insights & Strategy. “It’s clear that they do need to create a foundry business to fill the [factory]. The challenge will be choosing the designs that don’t compete with Intel parts in different segments. Intel won’t bring in a design that could strategically threaten them, which, ironically, could be the parts that could take best advantage of their leading process technology.”