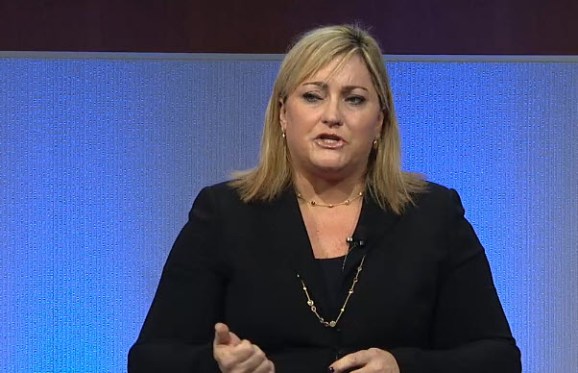 Intel president Renee James said at the company’s analyst meeting that it has experimented with a lot of new businesses and culled its efforts to focus on security, big data and cloud, and foundry, or making chips designed by external companies who will sell them under their own names, not Intel’s.

With security, Intel is moving to consolidate its McAfee antivirus software business with its own security efforts to deal with growing cyberthreats. That approach combines software and hardware together, and it is meant to deal with increasing security threats, greater threat complexity, and shifting points for origin for attacks, James said.

She said that dangerous security threats are now the domain of profit-motivated business people, not just random hackers or nation-states.

“The point of insertion has moved to the cloud,” she said. “A lot of what we see are now things hiding in the cloud.”

While security is far afield from Intel’s chip business, the vision is to enable safe, connected computing experiences from the client through the cloud to the data center, James said. The reason is that technology freed from security and piracy concerns is free to grow.

“It is silicon, plus software, from edge to edge,” James said.

In the past 18 months, Intel has re-engineered the McAfee product line and is poised to launch 30 new products. While past efforts have focused on detection and cleanup, Intel’s focus will be more proactive, protecting data wherever it is.

Lastly, James said that Intel will be more aggressive about expanding into the foundry business. Intel is one of the last few companies that is strong enough to manufacture its own branded chips. But many others want to tap Intel’s manufacturing expertise to fabricate chips that are designed by outside companies.

That business has a couple of prongs. Intel is expanding its semicustom microprocessor business, where it sells custom-designed processors to customers who want something unique to their purposes.

Intel is also opening its factories up to new outside customers. Intel will make chips for other companies. Not only that, it will help with the design and other services for design customers. Customers using Intel’s foundry business include Achronix, Altera, Tabula, Netronome, Microsoft. Other customers are not announced, James said.

“If it computes, it does it best with Intel,” she said.

Chief financial officer Stacy Smith said that the PC market is still a nice business to be in. That sector is a $33 billion business that generates operating profit of $12 billion a year. But Intel is investing less in its PC chips division going forward. It is also investing less in mobile phones. Now Intel will focus more on a handful of large mobile chip companies and more in tablets.