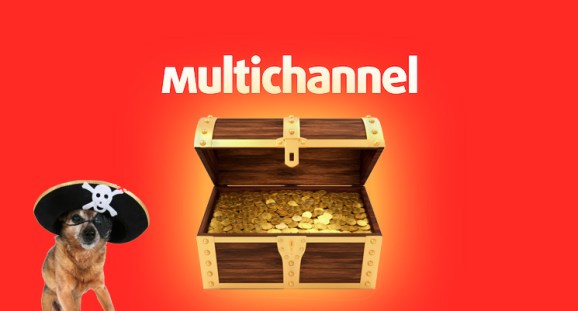 Multichannel's seed round did not actually arrive in a treasure chest, sadly.

Multichannel, which manages and tracks marketing efforts across (shocker) multiple channels, just raised a $3 million seed round from angel investors in Europe and Asia to bolster its engineering efforts.

Through Multichannel’s cloud-based dashboard, customers like Cisco and China Telecom can get a clear picture of the return on their marketing spending.

“Instead of focus group testing, we’re gathering data on every transaction on every click, like, and dollar sign,” Multichannel founder and CEO Dmitry Fedotov told VentureBeat.

Above: From left to right: Multichannel CFO Frederick Wong, CEO Dmitry Fedotov, and a racer in company-sponsored firesuit.

Unlike its competitor Rocket Fuel, which went public in September, Multichannel doesn’t think impressions are an important factor in determining the success of a marketing campaign. It’s all about the dollar signs, according to Fedotov.

“It doesn’t matter how many times people see your ad if they’re not spending any money,” he said.

The Hong Kong-based Multichannel only has 35 employees, but it has a wide geographic footprint, with six offices between the U.S., Asia, and Europe. Fedotov highlighted Multichannel’s ability to place ads in China as another factor that sets it apart from its competitors.

Most of Multichannel’s $3 million seed round is going into research and development.