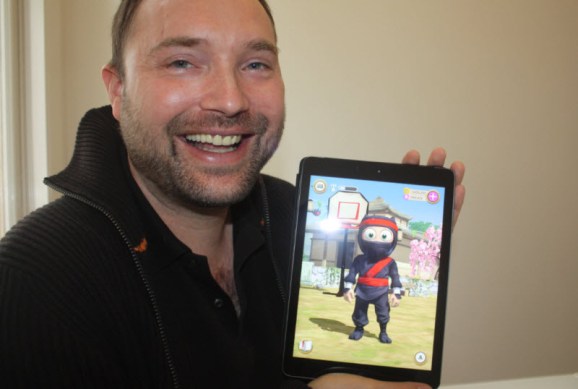 Above: Clumsy Ninja doesn’t talk, but he waves at you.

The London-based mobile game publisher launched Clumsy Ninja on the Apple iTunes App Store today as part of an effort to create a new class of games based on virtual characters with great artificial intelligence. It is a project that has been in the works for more than a decade.

NaturalMotion has had a string of hits like CSR Racing, CSR Classics, My Horse, and Backbreaker Football. The titles all have high-end graphics and take advantage of Natural Motion’s obsession with producing groundbreaking technology.

Above: Clumsy Ninja and Sensei.

“We are proud of [Clumsy Ninja], as it’s a fun game and the culmination of a lot of technology,” Reil said in an interview with GamesBeat. “It’s Pixar quality [animation]. The eyes of the character move to match your movements. We tried to make it to appeal to everyone.”

Few companies can do this kind of work. NaturalMotion started as a game middleware provider, creating a simulation technology called Euphoria. That tech found use in groundbreaking console games such as Star Wars: The Force Unleashed and Grand Theft Auto IV to simulate characters and imbue them with both intelligence and emotion.

With the free-to-play game Clumsy Ninja, NaturalMotion can finally bring that simulation technology to tablets, which have been making great leaps in processing power.

Above: Clumsy Ninja with balloons

“This is the first engine that simulates human motion. It models the nervous system, bones, and movement that creates something truly interactive,” Reil.

Gesturing to the iPad, he said, “Now these devices are fast enough to run it in real-time. You can touch the character and he reacts.”

Indeed, Clumsy Ninja is a wonderfully funny and warm character. You can tickle him by rubbing the touchscreen. You can pick him up and toss him into a basketball hoop. He gets slightly annoyed at that, but he doesn’t express any serious attitude. Reil picked him up and tossed him to the hoop, and he grabbed on to it. That was an act of self-preservation on Clumsy Ninja’s part. It was not a canned animation.

“Everything is physically accurate,” Reil said. “You can toss him and he’ll land on a box. We got away from all of the shackles of animation.”

The significance of that autonomous action can’t be understated.

Normally, game designers have to create painstaking animations that model every possible kind of behavior. They predefine what a game character will do based on certain inputs. But with Clumsy Ninja, NaturalMotion’s designers don’t do that. Rather, they create the character from the bones up. They do that just once. They imbue the body with physics, based on the Euphoria engine. So the arms will move like arms and limbs will behave in a realistic fashion. They marry that to artificial intelligence, which tells the character what to do in a given situation. Then they essentially let the character loose in a game world and see what happens.

Above: Clumsy Ninja goes through the hoops

“We work hard on making the character fully interactive,” Reil said. “It’s a full simulation, with no cheating.”

With canned animations, all you can do is play back an animation in response to something the gamer does. Clumsy Ninja can generate procedural, or on-the-fly, animations, based on actions taken by the A.I.

“It can never be surprising,” Reil said. “This is an autonomous character with its own personality.”

Hence, rather than creating a ton of animations, NaturalMotion creates a simulated character inside a game world. That takes a lot of work upfront, involving the creation of the engine, the physics, the A.I., and the game world. But once that work is done, it is reusable.

If Clumsy Ninja is successful, NaturalMotion will then be able to release a whole string of virtual character games based on the same technology. While it took a decade to get the technology right, the actual game took about a year to develop. The team, based in Oxford, England, had about 19 people at its peak.

Reil believes this kind of groundbreaking work is what it takes to succeed against hundreds of thousands of other competitors in mobile gaming. The challenge is getting the tech to work on a tablet, but the rapid advance of technology has solved that problem. And now Reil doesn’t have to spend a ton of resources on getting animations just right. That saves on memory usage.

The game runs on everything from an iPhone 4 and an iPad 2 upward. The simulation is designed to run at a smooth 30 frames per second. So far, NaturalMotion has no plans for an Android version.

Reil said that the Clumsy Ninja character is meant to evoke laughter and an emotional connection. There are other cute characters, such as a chicken and a squirrel that add more comedy. When I was playing with the Ninja, they popped into the picture and ran around together.

The squirrel tries to mimic the Ninja’s actions. And the Clumsy Ninja is trying to learn cool martial arts moves from his Sensei, or master. You can give Clumsy Ninja a high-five, and you can throw watermelons at him. You can inflate balloons, tie them to his limbs, and he will start floating in the air. He will sleep on a bedroll and dream about martial arts moves. You’ll see him make kicking moves in his sleep.

Beyond being a tech display, the game lets you do things like train in martial arts moves. Clumsy Ninja can go on quests and explore a few different environments. You can buy outfits and other things, but Reil said, “It is not designed to be a hardcore monetizing game. It is designed to be delightful.”

While NaturalMotion could use the technology for console games, Reil believes mobile is the right place for it.

NaturalMotion has more in the works. With 250 people on staff, the company is working on eight games at the same time. The company raised $11 million in funding from Benchmark Capital last year. It didn’t need the money, but it got Benchmark managing director Mitch Lasky on its board.