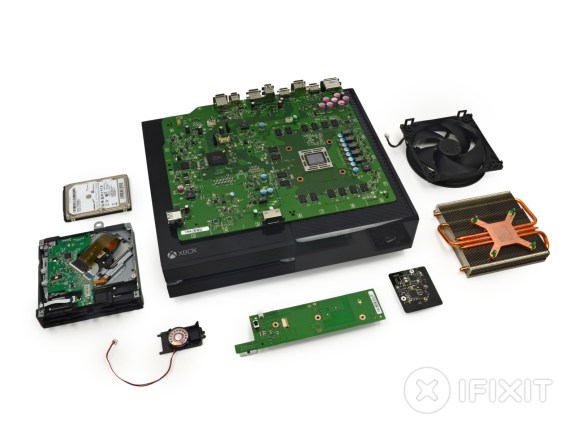 Both the Xbox One and PlayStation 4 are basically powerful PCs in game-console clothing.

But in the Xbox One’s case, this is even more so, according to a teardown by the venerable repair geeks at iFixit.

The Xbox One’s enormous and boxy case actually makes it seem like you’re shoving a computer underneath your television. In comparison, the significantly smaller PlayStation 4 case could actually add some style to your living room.

After tearing apart the enormous Xbox One case (which only took a bit of prying to accomplish), iFixit discovered hardware that wouldn’t be out of place in a high-end PC: an 8-core x86 processor, a Radeon graphics chip, 8 GB RAM, and a standard 2.5-inch laptop hard drive.

Similar hardware powers the PlayStation 4, but its sleek design includes some components that may be slightly more difficult to replace. For example, its CPU fan appears to be custom-made, while the Xbox One stuffs in a standard (and gigantic) 112 millimeter PC fan on a traditional CPU heat sink, both of which should be easy to swap out if anything goes wrong.

Above: The Xbox One’s hard drive and CPU fan unearthed.

Unlike the PlayStation 4, the Xbox One’s hard drive isn’t user replaceable. (Though it doesn’t appear that difficult to reach, if you don’t mind voiding your warranty.)

Aside from the Xbox One’s hardware, its software features — multitasking, integration with Skype, and more, much of it powered by a Windows core — also make it more PC-like than the PlayStation 4. I’ve previously argued that the Xbox One is Microsoft’s single boldest attempt to unify all of its services.

Looking at both new consoles laid bare, there seems to be a clear difference in how Microsoft and Sony approached their hardware design. Microsoft basically shoved as much as it could into a box, whereas Sony was able to bring out a much smaller case with useful features (like a replaceable hard drive).

I wouldn’t be surprised if Microsoft had far less time to develop the Xbox One’s design than Sony did for the PlayStation 4. That’s not necessarily a knock against the console, but I definitely expect lots of weight to be slimmed once Microsoft has more time to focus on design and releases the eventual Xbox One “slim” model.

iFixit ended up giving the Xbox One a repair score of 8 out of 10, the same as the PlayStation 4.