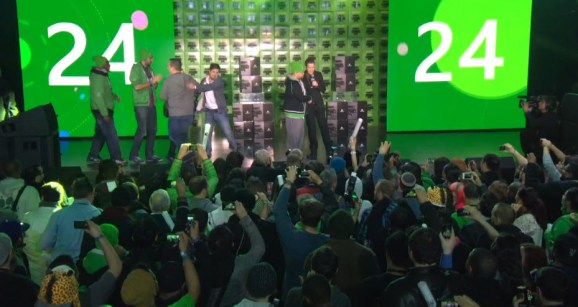 The stage at the Best Buy Theater in Times Square as the Xbox One debuted.

Microsoft said it sold more than one million Xbox One consoles in less than 24 hours as it launched the next-gen video game system in 13 markets yesterday, including the U.S. That means that the launch was the biggest in Xbox history, surpassing day one sales for the prior Xbox 360 and original Xbox generations.

The launch is significant because it represents the chance for an economic revival for the entire console game industry. For Microsoft, the Xbox One is the first new game console in seven years, and it marks the beginning of a new Xbox One economy. Microsoft sold more than 80 million Xbox 360 systems and generated billions of dollars in sales for Microsoft — and billions more for third-party video game publishers, making video games one of the most important and lucrative industries in the world.

If you multiply those million consoles by $500 each, and add one game to the mix, then Microsoft likely sold more than $560 million worth of merchandise at retail. The average buyer also probably bought a headset and additional controller, too, as well as more games.

Following midnight launches on early Friday morning, the Xbox One is now sold out at most retailers. Microsoft said, “We are working to replenish stock as fast as possible to meet the unprecedented demand from our customers.”

Sony also said that it sold more than 1 million PlayStation 4s last week as it debuted in the U.S.

Steve Beck, the managing partner at cg42, a consultant company that is currently fielding a survey on customers’ gaming console preferences, perceptions, and purchase intent, said both companies have had solid launches with very positive early returns.

“Even with the gaming landscape broadening to include the mobile and tablet categories, demand in the console gaming market remains strong, as does satisfaction with the gaming experience,” he said. “Our studies have shown a high purchase intent for both of these consoles. Both Sony and Microsoft can expect a strong holiday season.”

He noted that Xbox One has a couple of advantages in its gaming catalog and Kinect in a $500 bundle. But clearly, he said, the PlayStation 4 has a price advantage at $400.

Microsoft has 22 games available on the Xbox One. In the last 24 hours, Microsoft said:

“We are humbled and grateful for the excitement of Xbox fans around the world,” said Yusuf Mehdi, the corporate vice president of marketing and strategy at Xbox. “Seeing thousands of excited fans lined up to get their Xbox One and their love for gaming was truly a special moment for everyone on the Xbox team. We are working hard to create more Xbox One consoles and look forward to fulfilling holiday gift wishes this season.”