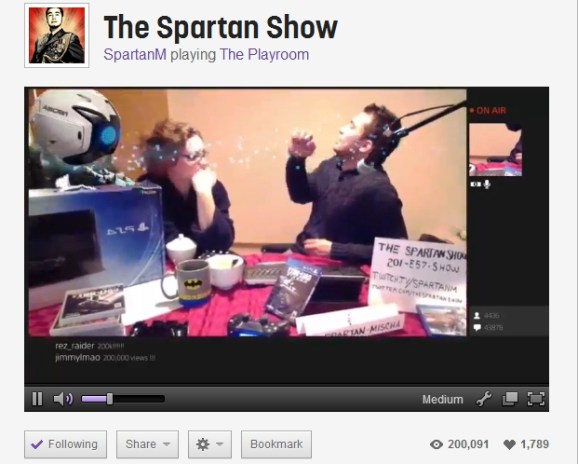 A young couple from Washington became the stars of streaming site Twitch.tv last night as they broadcast an impromptu call-in show live from their PlayStation 4 video game console.

When Sony Computer Entertainment announced live game streaming for its latest home console, it probably wasn’t expecting to spawn a talk show. Gamers are a creative bunch, however, and this ingenious couple started a livestream, known as The Spartan Show, using the augmented reality pack-in title PlayRoom and its cute robotic companion, Asobi (the couple renamed it Asobi-Won Kenobi).

Starting at 1 p.m. Pacific, the stream originally showed how to modify a DualShock 4 controller with the analog sticks from a DualShock 3. It morphed into a call-in show over the day, with viewers from America, Japan, and Europe phoning in to chat.

Despite an initially small audience, word got out to Shuhei Yoshida, the president of Worldwide Studios for Sony Computer Entertainment,  who tweeted that he was watching the show.

Above: Adam Boyes called up to congratulate The Spartan Show’s hosts.

The stream ended up running all night, albeit with only one host for the late shift, and by the time the couple signed off this morning — heading for a prenatal checkup — they had received over 200,000 channel views.

Whether or not the channel stays that active is uncertain, but last night the Twitch.tv airwaves definitely belonged to The Spartan Show, in what was an impressive display of the PlayStation 4’s streaming potential.

The Spartan Show should begin streaming again at 6 p.m. Pacific today, once the hosts have attended their scheduled parent-teacher conference.

In the meantime, you can check out the moment Boyes phoned the show in the video embedded below.