The media attention was on the launch of the Xbox One last night. But Nintendo says that it drew fans to its Nintendo World store in New York as well for the launch of Super Mario 3D World, The Legend of Zelda: A Link Between Worlds, and Mario Party: Island Tour.

Nintendo took its own photos to show that some gamers skipped lining up for Xbox One consoles. And sales would suggest that Nintendo’s 3DS family of portable gaming systems is still selling strong in spite of the launch of the next-generation game consoles and the weakness of the Nintendo Wii U console.

Microsoft launched the Xbox One on the same night Thursday. The event comes a week after the launch of the PlayStation 4.

Nintendo launched Super Mario 3D World for the Wii U. And it debuted The Legend of Zelda: A Link Between Worlds and Mario Party: Island Tour video games for the Nintendo 3DS.

Check out the photo gallery. 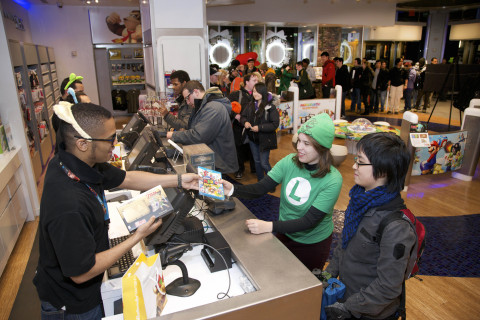 Above: Dani G. and Grace H., both from New York City, are two of the first to purchase Super Mario 3D World for Wii U and The Legend of Zelda: A Link Between Worlds Gold and Black Nintendo 3DS XL bundle.