Twitcasting is a mobile service that you use to broadcast live and watch live video. As the name would suggest, you can update Twitter with notifications about your videos, but the service will also send push notifications to anyone who has followed you to let them know that you’re currently broadcasting.

And yeah, that seems custom-made for a Kardashian. 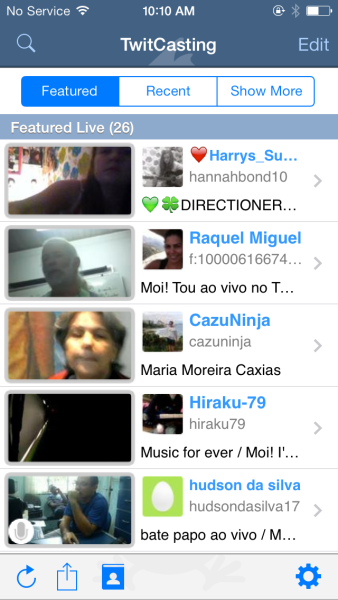 With about four million users right now, TwitCasting is more popular than Facebook among Japanese teenagers, and it has a significant following in Brazil — 13 percent of its users are Brazilian — and Mexico as well. The question, of course, is whether the service can start to penetrate the English-speaking world, specifically in the U.S.

Teens have already shown a propensity to migrate away from Facebook, as the social network has admitted (losing $18 billion in market capitalization along the way). I personally tend to think that migration is a little overrated, but there’s no doubt that kids want nonparental avenues for expression.

TwitCasting is attempting to “branch out in Sillicon Valley to explore users globally,” the company says, taking some attention away from messaging apps like Line in Asia and WhatsApp elsewhere for a video-focused approach to communication.

I wouldn’t be surprised, however, to see some sort of legal action by Twitter against the upstart social network, which launched in 2010. “TwitCasting” is clearly similar to “Twitter,” and the company uses a Twitter-like bird in its branding as well.

One odd thing about the app: The publishing app is separate from the consuming app, meaning you need both if you want to both share video and watch video. That’s an odd development choice — competitors Vine and Instagram do it all in one app.

Get it on the the app store of your choice, here: