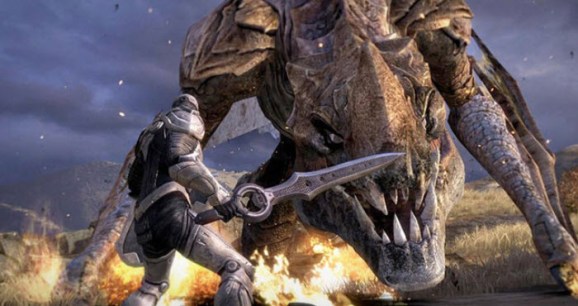 Infinity Blade III is one of the hot mobile games of the fall.

This may not come as a surprise to those watching trends in mobile, but the cost of acquiring a new smartphone or tablet gamer in October exceeded the average revenue companies got from that player.

The numbers from a new market research study suggest that mobile game makers should be cautious about how much they spend on acquiring new players, particularly if their free-to-play mobile games generate an average amount of revenue. SuperData, a New York-based market research firm, warns that we may see a “bloodbath” as companies try to spend too much money getting players who don’t spend enough.

SuperData estimates that the cost per install (CPI, which is the measure of what it costs in advertising to get a user) was $2.73 for mobile games, compared to an average revenue per user of $1.96. And in the coming holiday season, SuperData estimates that the CPI will be more than double the average revenue per user. SuperData says that for 99 percent of game makers, that’s a problem. It means the game developers will have to keep players engaged for two months or more before they can start making real profits.

“To anyone active in mobile gaming, it is no surprise that the cost of acquiring new users has been going up,” the company said. “Over the course of 2012, the cost per install on iOS increased 22 percent from the beginning to the end of the year. In some categories, we even recorded a tripling of the cost for an average mobile gamer.”

Marketing costs generally increase when a market matures. But during the summer, the average CPI broke the $2 barrier, and it has been growing ever since. In the first half of 2013, the cost of a new user was on par with revenue. But in the late summer, expenditures began to outrun revenues.

The average conversion rate from a nonspending to a spending user is 4.68 percent. And the average revenue from a paying user is $21.45 per month. That adds up to $100.39 in monthly earnings for 100 new players. With costs at about $225 per 100 users, you need to keep the users engaged and spending for at least a couple of months. That’s very hard to do.

Mobile gaming revenue is growing fast. The U.S. mobile game market is expected to hit revenue of $3 billion in 2013, up from $2.4 billion a year earlier.

The holiday season is still an important time for game releases, as Apple sells the bulk of its annual iPhone and iPad volume in the fourth quarter.

Above: SuperData research suggests that game advertising costs are exceeding revenues in mobile.