I’m not intimidating. At all. I’m short. I’m roundish. I smile a lot. No one would run away from me, much less if I’m in my pajamas and eating a bowl of cereal. But my morning routine was enough to scare the citizens of Tearaway when I suddenly showed up inside of their sun.

Out now exclusively for the PlayStation Vita, Tearaway is a 3D platformer set in a world made out of paper. You control two characters: the Messenger (either the male Iota or the female Atoi) and the You … the actual you who’s staring down at your Vita while playing the game. Thanks to the handheld’s camera, your beautiful mug is always seen inside the bright fireball in the sky. And with the touch controls, you can bend and shape portions of the landscape by using just your fingers.

It’s an ambitious and slightly crazy idea, but LittleBigPlanet developer Media Molecule manages to pull it off almost flawlessly.

Telling your own story

On a pure mechanical level, everyone sees the same thing: You explore the same worlds, fight the same Scraps (one-eyed enemies made of newspaper), and see the same cutscenes. But this doesn’t mean your experience will be the same as mine or anyone else’s. The story Tearaway tells becomes your own as soon as you get the chance to customize your Messenger. You can swap out eyes, ears, cheeks, and more either with preset decorations or custom designs that you can draw and cut out yourself. Some creative players have even managed to make costumes based on existing characters, like Wolverine, Link, or a Gundam.

In certain chapters, you may also decorate other characters, and your patterns continue to reappear as you play. Tearaway doesn’t care if you’re a good artist or not. I cringed every time I saw someone wear my ugly crown or my silly twirling mustache, but seeing my work pop up again and again made me feel like I had some authorial control (however minute) over the story.

Above: The PlayStation shapes indicate areas where you can use the rear touchpad to launch Iota in the air.

Another way Tearaway enables you to shape your story is through its Polaroid-like in-game camera. Its large assortment of frames and filters makes Instagram look quaint by comparison. While its uses are clever, like taking pictures of specific items to unlock real-world paper craft designs, I had more fun just exploring with it on my own. In-between jumping over tricky platforms or looking for hidden presents to unwrap (giving you more confetti, Tearaway’s currency), I was always on the lookout for cool places and angles from which to take photos.

Media Molecule makes it easy to share them, too. You can upload the images to Tearaway’s sharing site, Tearaway.me, by tapping on a little icon. Since no two players will have the same experience, the photos let you glimpse into specific moments of other’s hand-crafted adventures and compare them to your own.

And yes, you can take selfies.

Tearaway makes the best case yet for the Vita’s touch controls. The front screen and the rear touchpad do a remarkable job of making you feel like you can reach in and interact with Iota and his world. One recurring feature has you puncturing through tissue paper-like barriers (complete with protruding digits) to swat away Scraps and push away obstacles from Iota’s path. Other parts of levels open up like a pop-up book when you slide your thumbs to pull apart their tabs. Though plentiful, these moments never felt laborious or overwhelming.

Whether you’re flipping, poking, pinching, or pulling, the fantastic sound design helps sell the illusion that you’re playing with real paper and not just a digital re-creation of it. The levels crunch and rustle in a very natural way. I highly recommend you wear headphones to get the full effect. 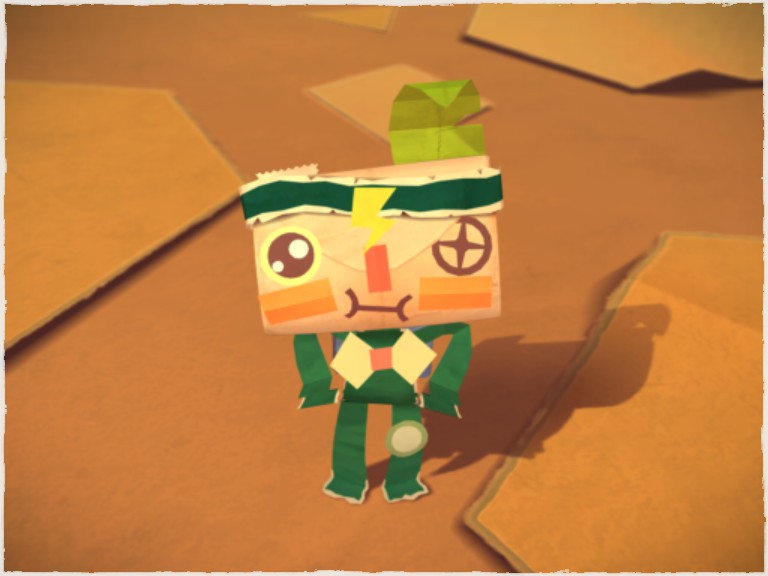 Above: My version of Iota.

I only had two nagging issues with Tearaway, and both of them had to do with its technical performance. Its other camera, the one that follows your character, is sometimes unreliable. This is especially troublesome during the top-down sequences, where it had a hard time keeping up with me. I fell to my doom a few times because I could’t see where I was going.

And while the framerate appears to hold steady for most of the time, it does dip a bit toward the end when a lot of things are happening onscreen. It occurred in 1- or 2-second bursts, so it didn’t detract too much.

Tearaway packs charm and ingenuity into every pixelated pulp. You’ll bounce along to its perky soundtrack, fall in love with the way its ocean waves  — as rolls of white paper — break on the shores, and smile when you see just how personal the ending is.

I left Tearaway feeling happy and content. What more could you ask for?

Tearaway is out now on the PlayStation Vita. The publisher provided GamesBeat with the digital version for the purpose of this review.