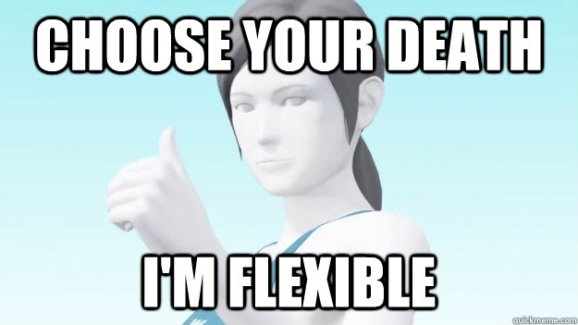 With the release of Microsoft’s Xbox One on Friday, the Xbox 360 and the PlayStation 3 generation officially ended. It was a long, eventful time, and the Internet community was always there to comment and break out the Impact font. You can basically tell the entire story of the late console generation with Internet memes … so that’s what we did. Here are some of the most significant gaming events of the past eight years presented through jokes the Internet told itself.

Microsoft showed off its second console for the first time during an MTV special that featured actor Elijah Wood and a musical performance by The Killers. This was the first time we’d heard the phrase “Xbox 360,” and the joke below grew out of people trying to understand the name. Or it’s just a trolling method, which I’m not ruling out.

Above: The real reason is that they didn’t want the “Xbox 2” to sound inferior to the “PlayStation 3,” but you can’t work Michael Jackson into that.

May 16: The PlayStation 3’s design choices

Sony unveiled the PlayStation 3 at 2005’s Electronic Entertainment Expo trade show (E3), and the Internet immediately had a few questions about the controller, the shape and size of the console, and Sony’s choice in fonts. But other than that, people were cool with the thing because it would be another year before we’d hear about pricing.

Above: Yeah, it was pretty big. And it made people hungry.

It’s weird to think that a time once existed where we didn’t know what a Wii was. On April 27, 2006, Nintendo ushered in the modern, post-Wii era when it announced that its new hardware would not be called the Revolution, which was its awesome development codename, but rather the Wii, which made sense to nobody. And we’ve pretty much been making jokes about it ever since.

Above: Even the Wall Street Journal couldn’t resist.

May 8: Sony makes it all happen

Sony’s press briefing at E3 2006 gave the Internet a lot to work with. At least four enduring jokes came out of it — two from the same presentation of action title Genji: Days of the Blade, in which producer Bill Ritch touted the game’s levels as being based on “famous battles which actually took place in feudal Japan” before immediately discussing the finer points of fighting giant enemy crabs.

Above: The “massive damage” meme was so insidious that developer Ninja Theory worked it into its PS3 launch title, Heavenly Sword.

Sony finally revealed pricing on the PlayStation 3 at the same show, and it fell to chief Kaz Hirai to deliver the news: The PS3 would cost $600 at launch. This would have been enough to spur a rash of nerd rage, but the meme-worthiness of the incident came from Hirai’s phrasing that the system’s price would be “five hundred and ninety-nine U.S. dollars.”

Above: The person “lol”-ing at the price dig in the upper-right may very well be Sony Computer Entertainment Worldwide Studios president Shuhei Yoshida.

Finally, we have to pick on Kaz Hirai again as he fell victim to genuine but sadly uninfectious enthusiasm. While showing off the original-PlayStation emulation capabilities of the PlayStation Portable handheld system, Hirai tried to build suspense around which game he was using to demo the feature. When the title screen came up, he uttered the two words that would be on his tombstone if the Internet ran a funeral parlor.

Above: The real tragedy is that Ridge Racer is, in fact, awesome.

EB Games/GameStop’s 2006 holiday gift guide included an ad for the Xbox 360 featuring an awkward picture of a red-headed kid with an even more awkward quotation next to him. The denizens of Internet bulletin board 4chan went to work and churned out hundreds of images based on the poor ginger and his goofy expression.

Above: It’s like staring into infinity. If infinity had braces.

When Nintendo’s motion-controlled console came out, a lot of people were enthused about it. So enthused, in fact, that the Internet began filling up with stories of Wii Remotes flying just right the hell out of players’ hands and putting holes in their TV screens. This one isn’t a meme in the traditional sense of “a picture with text in Impact font,” but all the cool kids started putting up videos of their mishaps on YouTube, and you could spend an afternoon watching thousands of dollars’ worth of high-grade electronics become garbage if that’s your thing.