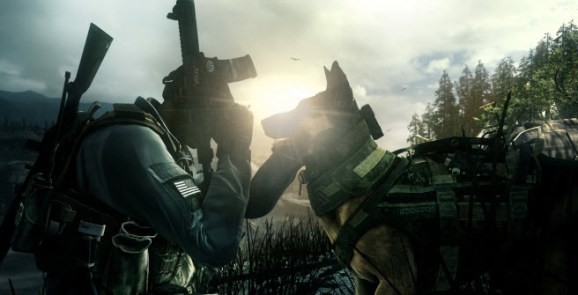 The cheeky joke among gamers is that the big innovation in Call of Duty: Ghosts is Riley the dog. And Riley has come out on top as Activision announced today that its title is the No. 1 most-played Xbox One game on a worldwide basis.

Above: The Sovereign map combat takes place inside an industrial complex.

Call of Duty: Ghosts is the No. 1 game in North America at retailers Best Buy, GameStop, Target, and Walmart. In standalone Xbox One software retail sales, the game is also No. 1 in the United Kingdom, according to GfK Chart Track, a entertainment marketing and research firm in England. Being in first place in gaming during the holidays is a big deal, since games have become one of the dominant sectors where consumers spend their entertainment dollars. Call of Duty: Ghosts sold-in to retailers more than $1 billion in sales in its first three days on the market. With sales like that, Call of Duty is one of the world’s biggest perennial entertainment properties.

Additionally, Call of Duty: Ghosts is the No. 1 most played PlayStation 4 game, according to Sony Computer Entertainment America, and continues to be the No. 1 top-selling PS4 title in retail sales in North America at Best Buy, GameStop, Target and Walmart.

I’ve logged quite a few hours myself on multiplayer and have discovered that it is a lot harder to score high in the rankings — or I’m just getting worse as a player.

On the PlayStation 4, Ghosts is also the most-played game, according to Sony Computer Entertainment America, and it is the No. 1 top-selling PS 4 title in retail sales in North America at Best Buy,GameStop, Target, and Walmart.

In a GameStop holiday survey of  1,000 PowerUp Rewards loyalty members and 500 general gift-givers, Ghosts is the most desired game.

“Around the globe, Call of Duty: Ghosts is leading the next generation,” said Eric Hirshberg, the CEO of Activision Publishing, a division of Activision Blizzard. “It’s the No. 1 selling title at key retailers and it’s also the most played game on Xbox One and PS4 global. As we’ve said before, we’ve got the best community of fans in the world, and we’re thrilled they’re coming with us to the next generation.”

Ghosts is also the No. 1 most-played Xbox 360 multiplayer game, according to Microsoft. More than one billion multiplayer matches of Ghosts have been played across all versions. Players have reached the highest multiplayer level, Prestige, more than 2.2 million times and have earned 3.3 trillion experience points (XP).

Above: Shoot as many demon bugs as you can in Extinction mode.

“Congratulations to our friends at Microsoft for the launch of the Xbox One,” said Dave Stohl, executive vice president, worldwide studios, Activision Publishing, Inc. “Xbox and Call of Duty together have formed a valued and lasting partnership on Xbox 360, and we know this is just the beginning. So we look forward to an exciting new future on Xbox One.”

Interestingly, Activision’s release didn’t have the same compliments for Sony and the launch of the PlayStation 4.

“As home to the largest and most engaged Call of Duty community, it is no surprise that the newest entry in the blockbuster franchise has quickly become the most played multiplayer game on both Xbox One and Xbox 360,” said Yusuf Mehdi, a corporate vice president of marketing and strategy for the Interactive Entertainment Business at Microsoft. “We congratulate our partners at Activision and Infinity Ward, and are proud to continue offering the best and most engaging Call of Duty online experience to our fans globally by launching all Call of Duty: Ghosts map packs first only on Xbox.”

Ghosts launched on both current generation and the PS 4 on Nov. 5, and on Nov. 22 on Xbox One.