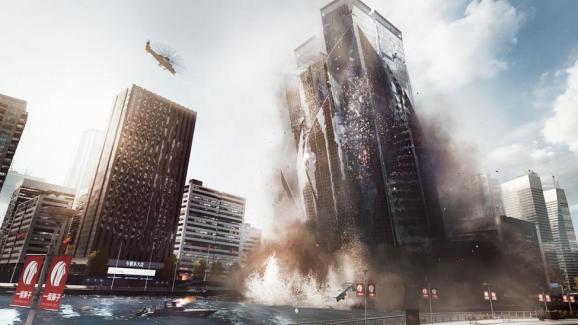 Above: Battlefield 4 lets you spot targets for helicopters.

You have to give credit to the game developers in Sweden who have built Battlefield 4, the modern combat first-person shooter game that debuted on the current-gen consoles and the PC on Oct. 29. They have finally outgunned Call of Duty, the most popular FPS in gaming.

At the same time, Electronic Arts’ DICE studio in Stockholm has stumbled with its online services. After playing the full single-player campaign on the PC and multiplayer as well, I was prepared to rate the game considerably higher than Call of Duty: Ghosts, its chief rival this fall. But I’ve also played the new versions of the game on the PlayStation 4 and on the Xbox One. The graphics look wonderful on those consoles, but the multiplayer service has had a lot of problems. I couldn’t even log into Battlefield 4 on the Xbox One with my existing account on Origin, EA’s online gaming service, and had to create a new Origin account altogether just to play on Microsoft’s Xbox Live platform. The problems have been so bad on the new consoles that EA is enticing players back with the promise of double XP (experience points) for multiplayer play from Nov. 28 to Dec. 5. The whole situation sucks, because I’ve seen how much effort DICE put into this game. EA has snatched defeat from the jaws of victory, and once again Call of Duty will wind up with a higher review score as a result.

DICE has struggled mightily over a decade to keep up with Activision’s 500-plus developers (and two studios) working on Call of Duty first-person shooter video games. Outnumbered and outflanked, DICE has had to match the Call of Duty developers in producing new multiplayer maps and downloadable content (DLC). But rather than make a blockbuster game every year, DICE has been creating a new Battlefield game every other year, alternating in the release rotation with the EA’s Danger Close studio, the maker of the Medal of Honor series of modern combat shooters.

But with lousy sales, Medal of Honor has been put on the shelf, and Danger Close has given way to an expanded DICE studio. DICE has focused on making a quality game every two years, and now its efforts have paid off with Battlefield 4, which beats Call of Duty for the first time in my opinion. DICE has taken the time to create a better, more dramatic single-player campaign story. It has created better graphics, and it has fashioned a multiplayer experience that is both realistic and fun (when it works right).

Call of Duty: Ghosts, which debuted Nov. 5 on the current-generation consoles, still focuses on the adrenaline rush of being an infantry soldier in a modern war setting. But by gradually inching up its creative efforts, DICE has crafted an experience that takes advantage of its strengths in character animation, environmental destruction, and vehicular combat. When it comes to modern combat, EA has finally had a better core game than Activision, because the sum of its parts beats out its rivals.

That doesn’t mean Battlefield 4 is going to outsell Call of Duty: Ghosts, which has more buzz and a bigger marketing budget. Multiplayer problems are holding BF4 back, and these hopefully are going to be temporary. But the overall effort shows that Activision and Call of Duty aren’t predestined to rule the multibillion-dollar first-person shooter market, particularly in a year when next-generation consoles can really show off the difference between the games.

The story is more dramatic, especially in the beginning

Battlefield 4 follows the fortune of a single squad, Tombstone, as the U.S. becomes embroiled in a war with a militaristic faction of the Chinese government. The first scene does a good job of highlighting a lot of the cool things that happen in the game, and it is also an intense beginning.

The action is set in 2020, six years after the events of Battlefield 3. Russia and the U.S. have been fighting for six years, but war with China is imminent because of a spat with Admiral Chang, the main foe, who plans to overthrow China’s government and support the Russians in the war with the U.S.

It all begins with Tombstone on an intelligence-gathering mission in the Central Asian nation of Azerbaijan that turns hot. The four-man squad must fight its way through hordes of enemy troops through areas that show off the power of DICE’s Frostbite 3 game engine, which enables both cool graphics and physical effects such as the destruction of walls, glass, buildings, trees, and just about anything you can use for cover.

As the player, you can hide behind a concrete barrier and shoot at enemies. If you sit there long enough, the enemy bullets will tear the concrete to pieces, and you’ll have no cover. You can do this with virtually any kind of barrier, and you can deny your enemies their hiding places by shooting away at barriers. This adds to the intensity of the beginning, as you’re seriously outgunned by enemy firepower. It’s actually kind of fun to sit behind a barrier and wait for your enemy to shoot it away, given the great sound effects of bullets thudding into the stone and other materials protecting you. But wait too long and you’ll die.

One of the things you can do is call in the help of an attack helicopter, simply by ordering it to attack enemies that are in front of you. While the helicopter has the enemy pinned down, you can circle around and outflank your foes. You can also direct the other members of the Tombstone squad to attack certain enemies. You can also do this kind of target spotting for your comrades in multiplayer.

Once you attack with the helicopter and mow through a few waves of enemies, you have to attempt an extraction with the helicopter. You do so by climbing to the top of a skyscraper that is under construction. But the building collapses under you in spectacular display of the physical effects of the Frostbite 3 game engine. Your boss gets pinned down, and you have to decide to saw his leg off or not. That scene is gruesome, but this isn’t the end. Your team attempts to escape by car, and then that ends in ruin. Once more, as you will throughout the game, you’re forced to make a decision about who to save or who to let die. It reinforces a message about the kinds of intense sacrifices that soldiers make in the line of duty.

That series of mishaps for Tombstone in the very first mission sets up a story that, for the first time in the Battlefield series, actually engaged me. It had characters like Irish that look realistic, and it made me care about their fates. It made full use of the devastating firepower of modern soldiers, and it made me feel like I was in a firefight that was turning out bad. Unfortunately, the rest doesn’t have the same refined sense of dramatic control as that first level. If it did, I would rate this game much higher.