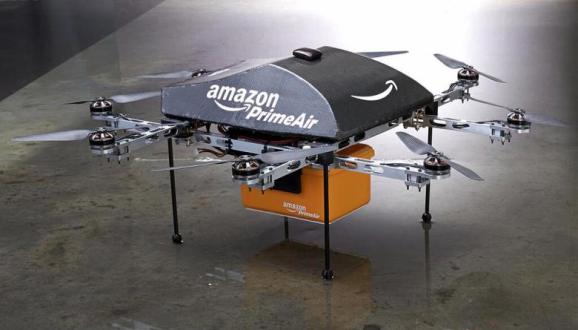 Your future Amazon packages could be delivered by a flying robot.

Yes, it looks like something straight out of science fiction, but as Bezos explains it, the service could be up and running within four to five years. “It will work, it will happen, and it’s going to be a lot of fun,” he said.

Amazon is still waiting on FAA approval for unmanned aerial vehicles. The drones will be able to pick up packages under five pounds and deliver them up to 10 miles from its distribution centers.

“Safety will be our top priority, and our vehicles will be built with multiple redundancies and designed to commercial aviation standards,” the company notes on its Prime Air site.

While the news came as a surprise (Twitter lit up with incredulous responses tonight), it actually makes plenty of sense for Amazon.

The company has historically led the way in terms of delivery mechanisms: It survived the ’90s dot-com bust by building a lean business, not by losing tons of money on shipping costs; it helped to power a new wave of online services with its AWS cloud infrastructure; and with its cellular-powered “Whispernet” feature on the original Kindle it envisioned a world where content can reach you anywhere, before that idea was made real by the rise of smartphones and tablets.

Of course, Amazon has some considerable challenges to overcome with Prime Air. How exactly will Prime Air drones find addresses in cities? And even in less crowded areas, Prime Air’s security seems suspect (in the video below, the drone simply drops a package off at a house’s door).

On the other hand, having its own drone service could eventually help Amazon to better cover areas where traditional shipping services are weak, and it could potentially be cheaper to run than paying shipping fees to the likes of UPS and FedEx.

By the time Prime Air launches, we can expect plenty of other drone-powered services to hit our skies. But, just like Google did by announcing its self-driving cars long before any other company, the public will now think of Amazon as synonymous with drones.