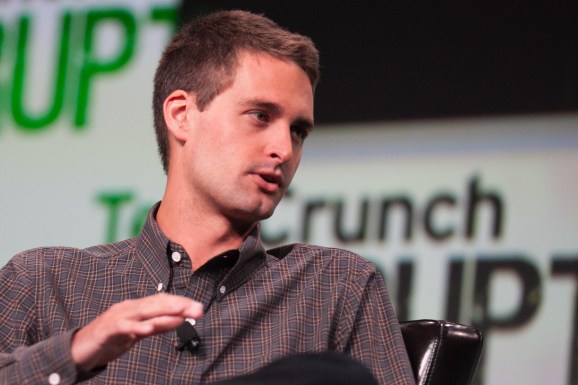 A little more than two weeks ago, we reported on the rumors that Snapchat, the private photo sharing service that lets you send pictures to people that disappear after a few seconds, rejected a $3 billion purchase offer from Facebook.

Many people believe the SnapChat founders are crazy for turning down such a lucrative offer. But apparently, the founders had their reasons, including the fact that Snapchat was reportedly entertaining other lucrative offers at the time of the Facebook offer, such as an investment from Chinese e-commerce company Tencent Holdings that would value the company at $4 billion. The founders apparently believed they can do better than Facebook’s offer.

A recent profile in CNET of Snapchat 23-year-old co-founder and CEO Evan Spiegel sheds more light on the background on the company’s leaders, and their possible motivations. One key finding: Unlike the vast majority of entrepreneurs, Spiegel was born into upper-class. His mother was the youngest woman ever to graduate from Harvard Law School, and worked as a partner from law firm Pillsbury, Madison & Sutro, before leaving to be a stay-at-home mother. His father is a partner at the law firm Munger, Tolles & Olson, a job that CNET reports “afforded the family a very comfortable lifestyle in a $4.6 million home in Huntington Palisades, an upper class neighborhood.” The articles refers to things like Spiegel’s driving of a 2006 Cadillac Escalade, which his father bought new for $56,000, and Spiegel’s later request to his parents for a BMW 535i, a $75,000 car — something his mother apparently later leased for him.

The article doesn’t explicitly tie Spiegel’s lucky beginnings with his later bold rejection of the $3 billion offer from Facebook. But it does provide fodder that allows readers to make that connection: “Spiegel’s turning down Facebook makes a little more sense to me now,” wrote one commenter on the story. “While he my have passed on an opportunity to be super wealthy, he was born and will remain very wealthy no matter Snapchat’s future.”

In other words, if you’re already wealthy, why not roll of the dice for the biggest possible win?

In this way, Spiegel may be different from most entrepreneurs. Some 90 percent of entrepreneurs hail from middle class or upper lower-class backgrounds, according to a study by the Kauffman Institute, presumably because they are the ones who have the least to lose from risking everything on a start-up. But following that logic, they’ll presumably also be more willing to seize the opportunity to realize a massive exit when one comes their way.

Still, some readers disagree that that his parents’ wealth played a role in Spiegel’s decision. They say the law partner wealth of Spiegel’s parents still isn’t enough to have satiated Spiegel. Spiegel won’t get an inheritance until his parents die, and the cars are relatively minor gifts in the meantime. There’s a huge difference between that and $3B, tweets Sara Hanks.

It remains to be seen whether Snapchat can pull off a valuation of much more than $3 billion. However, in the last few days, there’s been more discussion of the growing competition between messaging apps. For example, WeChat, the mobile-focused app in China that is also now growing rapidly abroad, says about quarter of its 270-million-plus regular users are now outside of mainland China. Snapchat’s Spiegel has said he admires WeChat’s monetization efforts, including in-app purchases. Meanwhile, Facebook-owned Instagram (according to recent reports) is working on a new messaging feature – perhaps because of Snapchat’s rejection of Facebook.