Facebook announced today that because people are clicking on almost triple the number of news stories than they did last year, the social network is going to show more of it — and more high-quality news. Especially, Facebook says, on mobile. 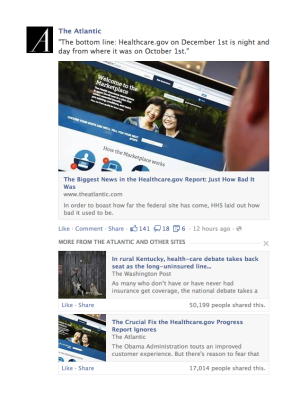 “We’ve noticed that people enjoy seeing articles on Facebook, and so we’re now paying closer attention to what makes for high-quality content and how often articles are clicked on from News Feed on mobile,” Facebook engineers Varun Kacholia and Minwen Ji posted this afternoon. “What this means is that you may start to notice links to articles a little more often.”

Of course, adding one thing often means taking away another, and this is no exception.

But this time, what Facebook is taking away is cheap meme-type content — the kind of click-if-you-love-puppies content that Facebook scammers and spammers use to build audiences and make money. And generally speaking, that’s a good thing.

In addition, Facebook will show related stories near those that you’ve clicked on, articles that’s interesting and relevant from a Facebook user’s point of view but also potentially controversial. In the example Facebook shows, a theoretical user is seeing a story from the Atlantic in his or her news feed. That story, of course, shows up because this user has liked the Atlantic‘s Facebook page and is therefore getting a feed to its shared content. But now you’re also getting content from the Washington Post — a news outlet you may not have liked.

However, what Facebook takes with one hand it gives back with the other: Stories with a lot of engagement (mostly comments on Facebook) will be bumped to the top of your news feed more frequently now.

“After people read a story, they are unlikely to go back and find that story again to see what their friends were saying about it, and it wouldn’t bump up in News Feed. With this update stories will occasionally resurface that have new comments from friends,” Facebook says.

The danger in prioritizing news in the Facebook News Feed is, of course, that the more news-oriented your feed becomes, the less social your feed also becomes — at least in terms of updates from friends and family. Which then makes Facebook little more than a web start page with links to the most recent content, and something you can replace fairly easily.

So Facebook is treading cautiously — as it does whenever it jiggles the News Feed algorithms — to not overpower social with news.