Spotify has rolled out a new set of analytics tools specifically for artists that have music featured on the streaming service, the company announced today.

The new analytics are part of a larger effort by Spotify to show that the service is important to musicians. Despite being the most popular on-demand streaming music service in the world (and certainly the most well-funded), Spotify hasn’t fared well with some music artists — specifically those that aren’t represented by a major record label.

Why? Well it turns out that most artists don’t actually make much money from Spotify. (That’s a bit surprising considering that the company is spending upwards of 70 percent of its annual revenue on music licensing fees alone.) This criticism was pointed out more publicly back in July when Radiohead’s Thom York and fellow Atoms for Peace band mate Nigel Godrich published a series of tweets about their compensation after yanking their entire song library from Spotify.

Spotify, however, counters the heat its taking by restating the cumulative amount of money its paid out to artists. The company said it has paid $500 million to artists in 2013 thus far, which is much higher than previous years as the chart below shows. It also launched a new webpage devoted to helping artists understand how Spotify pays artists, and where that payment falls in relation to others. 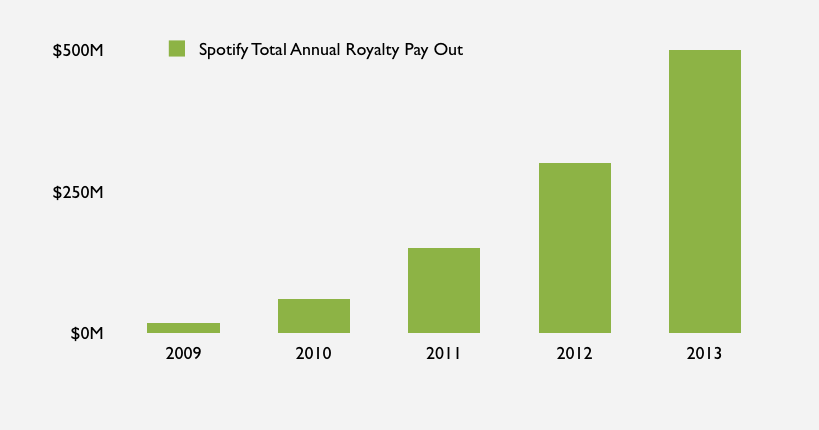 “Many artists have expressed a desire to understand this business model and royalty payment approach in greater detail,” Spotify said in a statement. “We have heard your questions (and complaints) and wanted to address them transparently and accessibly in order to express our commitment to working collaboratively with the creative community.” 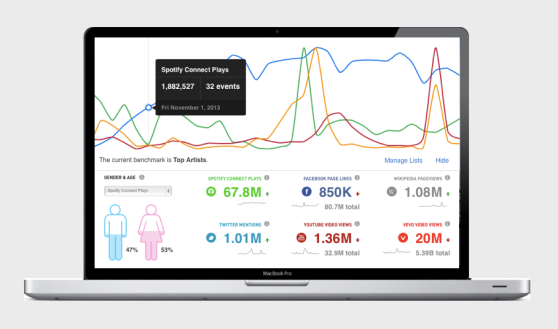 As for the new analytics, Spotify is providing a new dashboard (shown above) for artists that shows comprehensive listening activity thanks to a partnership with Next Big Sound as well as data about concerts and merchandise sales via Topspin. The move is very similar to how Google initially pitched its Google Music’s Artist Hub, yet Spotify’s analytics might be more useful since many artists are already using services like Topspin.