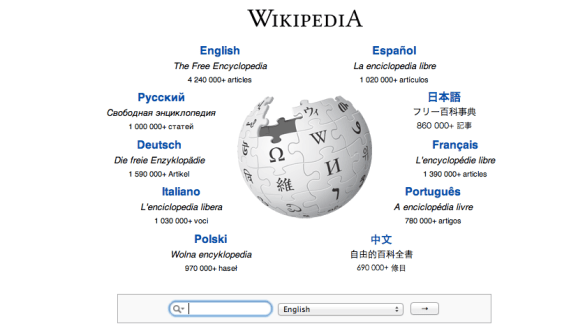 In the last full year, more than 1.1 million people donated the equivalent of $30 million in 80 different currencies to the Wikimedia Foundation, which runs Wikipedia. This year, the Wikipedians are hoping for even more — about $50 million.

Today Wikipedia started fundraising again and announced that fact via a site-wide banner, calling itself the “temple of the mind” and a “place we can all go to think.”

DEAR WIKIPEDIA READERS: We are the small non-profit that runs the #5 website in the world. We have only 175 staff but serve 500 million users, and have costs like any other top site: servers, power, programs, and staff. To protect our independence, we’ll never run ads. We take no government funds. We survive on donations averaging about $15. Now is the time we ask. If everyone reading this gave $3, our fundraiser would be done within an hour. Wikipedia is something special. It is like a library or a public park. It is like a temple for the mind, a place we can all go to think and learn. If Wikipedia is useful to you, take one minute to keep it online and ad-free another year. Please help us forget fundraising and get back to Wikipedia. Thank you.

Part of the funds will go to expanding Wikimedia headcount, which is ridiculously low for an organization that supports the world’s largest and most-trafficked source of information. In its 2013-2014 plan, Wikimedia says it wants to hire 19 new developers, five new people in its grants department, which donates some of the money given to Wikipedia to worthy, relevant causes, and one additional person in communications to support the community translation efforts that have made Wikipedia almost globally accessible.

“Imagine a world in which every single human being can freely share in the sum of all knowledge,” founder Jimmy Wales has said.

Donations can be made right at Wikipedia, on any page, or at the Wikimedia site.