The Xbox One is not even two-weeks old, but the young console has already done so much.

Microsoft revealed that gamers have already spent 50 million total hours “in games and entertainment on Xbox One,” according to an Xbox.com blog post. The company also released an infographic that covers some more extreme statistics from the console’s launch lineup. Check it out: 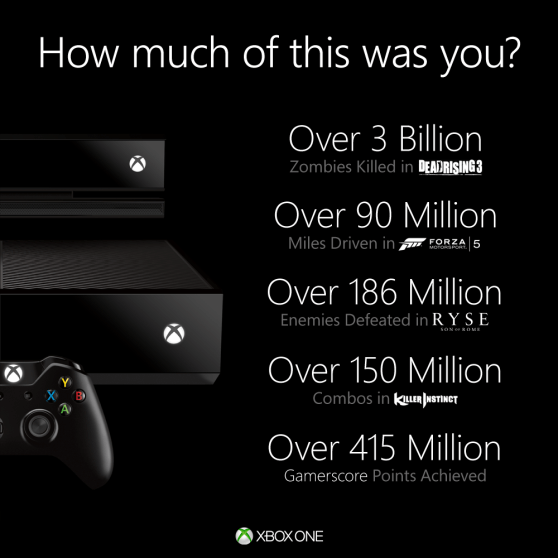 While fun metrics like these show that people are definitely enjoying the new console, Microsoft isn’t updating the sales performance for Xbox One. That’s opposed to Sony, which earlier today revealed that it already sold 2.1 million PlayStation 4s worldwide.

We’ve reached out to Microsoft to ask for an update on the console’s sales, but the company only provided us with the following statement from Xbox marketing boss Yusuf Mehdi:

“We are humbled and gratified by the overwhelming response from our fans to the launch of Xbox One. Eleven days in we are seeing record-breaking sales and are selling every Xbox One we can make. Demand is far exceeding supply in the 13 countries we’ve launched and we are sold out at retailers around the world. We are seeing incredible usage from our engaged fans who have purchased Xbox One with more than 50 million hours spent on Xbox One games and entertainment.”

Some early reports following the Black Friday sales suggested that Microsoft’s Xbox One might have outpaced PlayStation 4 at stores like Walmart and Target. This comes after Microsoft claimed that it sold more than 1 million Xbox Ones worldwide in less than 24 hours.