I was playing Google’s new “race with reindeer” game this morning, and hit his sleigh too many times on the side of the track. 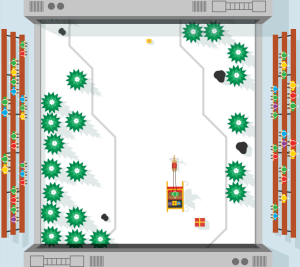 Google has gone all out with Santa this year with its Santa extravaganza, adding not just a Santa Tracker, but also Santa’s Village, with games and interactive scenes that will unlock as Santa gets closer and closer to delivering all the goodies he forgot on Black Friday and Cyber Monday. That includes racing with reindeer as you pick up gifts, ensuring Rudolph is streamlined and ready to soar in a flight tunnel, with much more to come in the next few days and weeks.

If you get lucky, you’ll also see an Android-occupied spacecraft. Which might explain how Santa gets gifts to all those girls and boys in just one night: alien technology.

Google’s also releasing a Santa Tracker Android app with a built-in flight game and a Chrome extension so you can count down the days to Christmas pretty much everywhere you happen to be. The app is coming in mid-December, Google says.

Oh, and that bit about killing Santa?

Actually, he’s annoyingly indestructible. Santa grunts “oh, oh, oh” when you steer his sleigh into obstacles, but recovers his good cheer when you drive well, reversing the refrain to his standard “ho, ho, ho.”

And just so you know, Santa (and Christmas) are 19 days, 18 hours, 22 minutes, and two seconds away. At least, last time I checked.