Update: several credible sources have told me they believe iJailbreak Pro is a scam. I have removed the link.

Months after its release, iOS 7 is not yet jailbroken. At least, that’s the popular belief.

So a number of prominent people, including science fiction author and digital freedom activist Cory Doctorow, have banded together to establish the “Device Freedom Prize” — a crowdfunded reward for the first open source iOS 7 jailbreak. The ringleader is Elizabeth Stark, currently an entrepreneur-in-residence at StartX, a Stanford University accelerator.

There may already be an iOS 7 jailbreak available, contrary to the group’s webpage, which states that there is not. iJailbreak Pro has released a paid jailbreak that ranges in price from $30-50. But it is not, of course, open source — and several reputable people have told me they believe iJailbreak Pro is a scam.

“We strongly believe that users should have the freedom to control their devices,” the group says. “We want an open source jailbreak for iOS 7, giving users the capability to install what they want on their own devices and the ability to audit the code they’re using to do so.”

Currently, the prize would provide about a MacBook Air and an iPad worth of reward to the successful hackers — the amount is $1,790. However, today is the first day of the endeavor. 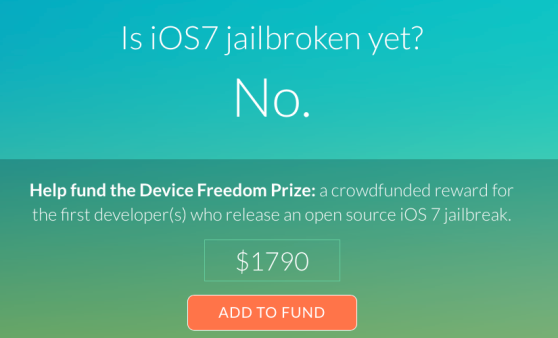 A working jailbreak that warrants the cash must work for iPhones from the 4S and up and support the latest version of Apple’s mobile operating system: iOS 7.04. And, unlike iJailbreak Pro, it must be freely available and accessible to the average user.

Currently, a member of the judging panel, iFixit cofounder and CEO Kyle Wiens, is the leading contributor. His company has thrown $500 into the pot.