Google recently released Android 4.4 KitKat, but the new OS is only available for a few devices right now. Currently, the majority of Android smartphones and tablets run Jelly Bean, and the rest are running even older OSes.

Developers have long dealt with this split in users, which studios refer to as “fragmentation.” It can cause issues when developing games and apps, but mobile game publisher Tapjoy has evidence that suggests that developing for older Android OSes isn’t necessarily a handicap when it comes to generating revenue on Google’s platform. 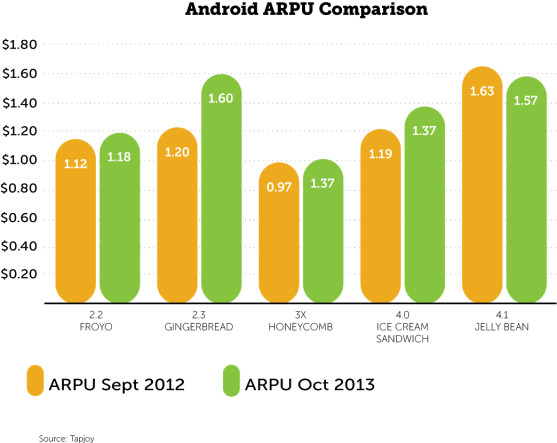 Above: ARPU is up for all Android versions except Jelly Bean.

Tapjoy, found that the average revenue per user for Gingerbread is now greater than it is on Jelly Bean. Gingerbread (Android 2.3) debuted three years ago, but nearly one in four Android devices still uses it.

Average revenue per user (ARPU) is $1.60 on Gingerbread compared to $1.57 on Jelly Bean. Android’s Froyo and Ice Cream Sandwich versions come in at $1.18 and $1.37, respectively. ARPU for all versions of Android, except for Jelly Bean, are up from 2012.

“Gingerbread’s ARPU rise is good news for Android developers, because it means that users on this older OS version are still driving solid revenue,” reads Tapjoy’s report. “The fact that Gingerbread and Jelly Bean are so close in ARPU actually tells us that Android may be reaching a point where monetization rates are pretty similar between the newer and the older OS versions, which, if true, would make fragmentation less of an issue.”

Tapjoy does note, however, that while Gingerbread has a small advantage in ARPU, Jelly Bean more than makes up for that with its 55.6 percent installation rate. The publisher suggests that developers looking to optimize for one version of Android target Jelly Bean, and it doesn’t believe KitKat will take that position for quite some time.