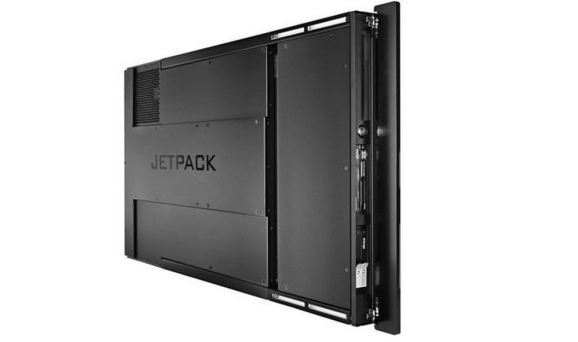 If the future of PC design is slick, jetpack-like hardware, count me in.

Hardware-design company Piixl has a new PC that it revealed today called the Jetpack (as first spotted by Digital Spy). It sports a superthin body and runs Valve’s upcoming Linux-based SteamOS. The amazing part? Piixl designed it to snap to the back of your television so that it is virtually invisible.

“Jetpack is designed for gamers that do not want to compromise on performance nor interior design,” Piixl managing director Francois-Xavier Gardes said in a statement. “Whether wall-mounted or on a table, its presence stays smart and minimalistic while providing leading edge-performance and tweak potential virtually on par with a full-tower.”

Piixl intends to release the Jetpack on Jan. 1 for approximately $1,000. The company hasn’t posted the full specifications yet, but it does promise that it will leave the PC open to hacking.

“If the future of gaming is open, so should be the hardware platform it is being played on,” said Gardes.

SteamOS means the device will have an interface ideal for the television. Valve debuted SteamOS in September. It is the company’s Linux-based operating system built specifically for living-room gaming. Valve is incorporating its Big Picture mode, which is the user interface that it designed for playing PC games with controllers.

We’ve reached out to Piixl, and we’ll update this post with any new information.

Valve is currently working on Steam Machines of its own, but it said from the beginning that it wants to keep SteamOS open. The reason for that is so companies like Piixl could innovate in terms of hardware design.