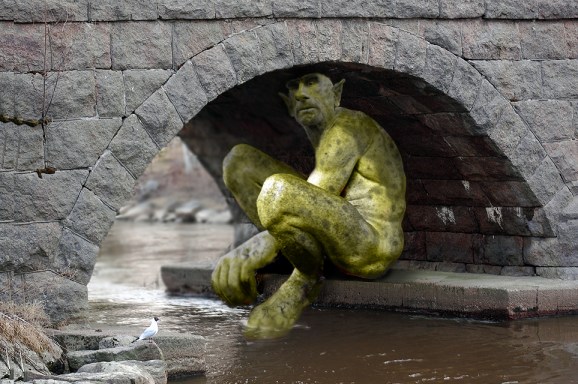 A troll, going back into the shadows.

The House passed the Innovation Act today in an effort to thwart patent trolls.

The Innovation Act is a comprehensive bill aimed at neutralizing patent trolls. The initial bill had six key parts, as outlined by the EFF, which called it the “best patent troll-killing bill yet.” Provisions include requiring the loser in a patent case to pay the winning side’s costs and fees, and heightening requirements for filing suits in the first place.

Getting the bill through the House is generally seen as a victory for the tech industry, which patent trolls have plagued for years.

“The tens of billions of dollars spent on settlements and litigation expenses associated with abusive patent suits represent truly wasted capital,” Rep. Bob Goodlatte (R-Va.), the bill’s sponsor, told The Hill. “The patent system was never intended to be a playground for litigation extortion and frivolous claims.”

It also something of a legislative miracle, considering this House is ignominiously known as the most unproductive and least effective ever.

However, many advocates for patent reform are saying it still falls short. A few organizations are also raising concerns that the Innovation Act unfairly burdens small businesses and is getting rushed through Congress without careful consideration of the consequences.

“The Innovation Act isn’t perfect. It doesn’t go nearly far enough to reform the demand letter problem. Its provisions protecting consumers and end-users, while present, aren’t as robust as we would hope,” said Electronic Frontier Foundation senior staff attorney Julie Samuels. “But the Innovation Act is nonetheless a huge step in the right direction.”

The most controversial portion of the bill regarded the “Covered Business Method” (CBM) program.

Supporters of the CBM program argued that it gives smaller companies greater opportunities to protect themselves from patent trolls.

However, corporations with large patent portfolios — such as Adobe, IBM, Microsoft, Qualcomm, and members of the Business Software Alliance —  lobbied hard and succeeded in blocking the CBM program.

“This would have far-reaching implications, because data processing is integral to everything from cutting-edge cancer therapies to safety systems that allow cars to respond to road conditions in real time to prevent crashes,” CBM opponents said in a letter to Congress. “Subjecting data processing patents to the CBM program would thus create uncertainty and risk that discourage investment in any number of fields where we should be trying to spur continued innovation.”

The EFF and other patent reform advocates said this significantly weakened the bill.

“The passing of the Innovation Act is a great step in dramatically reducing the most egregious patent trolls, but the fact of the matter is that there is still a lot that must be done,” FindTheBest CEO Kevin O’Connor told VentureBeat. “Removing the CBM expansion provision was a huge mistake. I fully support the Innovation Act, but the root problem still exists and will continue to exist until something is done to address the USPTO and the fact that it issues 500,000 low quality patents that are wreaking havoc on innovation and small businesses across America each year.”

And, of course, some organizations and individuals are expressing concern and dissent over the bill as a whole.

“NSBA supports reasonable efforts to protect small businesses from unnecessary and unwarranted patent infringement actions,” said NSBA president and CEO Todd McCracken. “Unfortunately, this bill goes far beyond what we believe is reasonable and will ultimately do more harm to small inventors than it does to reduce the number of frivolous lawsuits faced by small firms.”

Intellectual Asset Magazine published an article outlining why Congress should delay or reject the Innovation Act. Reasons include that there is no widely-agreed upon definition for patent troll, and that it will make it more expensive, complicated, and time-consuming for patent owners across all sectors to assert their patents.

“The Goodlatte Innovation Act is not a small step,” IAM said. “It would represent a fundamental change in the way that patents are litigated in the U.S., one that tips the balance in favor of deep pocket defendants — infringers — and against cash-tight plaintiffs — innovators and inventors.”