Now you can create your own version of Angry Birds — and perhaps become more popular as a result. 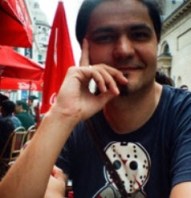 Incuvo is unveiling a new free-to-play app called Createrria that lets neophytes create their own games that run on the iPad. You can use this game creation platform to make games that resemble simple two-dimensional titles like Rovio’s Angry Birds. You can use pre-created art and modify the assets as needed. You can modify characters using a character creator, all with the touch of your finger on a touch screen. You can select the type of game, such as a physics-slingshot game, and then design your own levels.

Then you can share the game with your friends, who can play it. The game creation tool is part of wider movement to democratize game development and establish what futurist Paul Saffo calls the “creator economy.” In this economy, people shift from consuming entertainment to creating it themselves. And what’s remarkable about Createrria is that the tools are so simple — with intuitive touch-screen controls — that just about anybody can do it.

“It’s simply fun and very easy to play,” Wojciech Borczyk, the co-founder of Incuvo, said in an interview with GamesBeat. “People are doing crazy stuff with it.”

The app is already available in some markets such as Australia and Canada thanks to a four-month soft launch that enabled the company to test and improve its engagement metrics. During that period, a community of 40,000 users created about 60,000 games. It has been in the top-download app rankings in the territories where it has been tested. Now the game is going to be available on a worldwide basis in the Apple iTunes App Store. There are almost 100 different assets that creators can use. 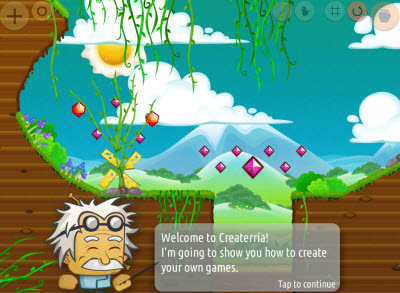 One of the things that makes it easier is an Einstein-like cartoon character who guides you through the tutorial on how to use the touch screen to create whatever you want. You can think of it as LittleBigPlanet for iPads (after the popular Media Molecule game on the Sony PlayStation 3).

Incuvo was founded by Polish game entrepreneurs Jakub Duda and Borczyk. They began the company in January 2012, after leaving one of Poland’s biggest game companies. Prior to that, they had started their own game company to make Nintendo portable game titles. Earlier this summer, they went through the YetiZen game startup accelerator in San Francisco.

Incuvo, which is based in Katowice, Poland, is in the midst of raising its second round of funding. The company is trying to raise $2 million, and it has already raised $300,000 from current investors, Duda said. Previously, they raised $1 million in seed round funding.

“It’s a physics-based sandbox game creator,” Borczyk told GamesBeat. “We think we have a very good platform engine. Somebody just created a scene from the movie Gravity.”

The goal is to make game creation as common as other kinds of activities, such as making and editing photo art, painting, composing music, or even creating virtual pottery, said Duda.

It will be interesting to see how it goes. Currently, you can’t upload your own art, but you might be able to do so in the future. The company updates the platform every few weeks. Incuvo expects to add an Android version later. You can spend real money on virtual items or new decorations to use in your game or your profile. But you don’t have to do so.

Right now, you can’t earn money from your creations. But you can earn virtual items that you can use to create more games. The Incuvo team is thinking about how to enable players to sell their own games.

Some rivals have tried the same thing and faltered. But those who hit it right — such as Mojang’s Minecraft — can tap into an audience of millions. Linden Lab has recently been focusing on creativity games and apps outside of its virtual world of Second Life. The game took awhile to complete.

“Building simple things that are accessible to normal players is very hard to do,” Borczyk said.

Check out a sample game in the video below and in the launch trailer below that.