Updated with corrections on developers: 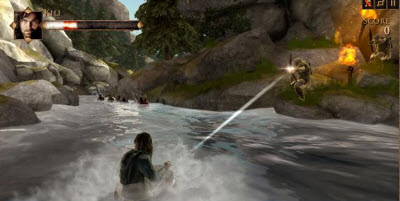 Above: The Hobbit: Desolation of Smaug — Barrel Escape

The mobile game expansion could be a big moneymaker for Kabam, which says that last year’s Hobbit game generated nearly $100 million in revenue. Kabam appears to have scored big with its license, as there will be another film coming out next year.

Kabam released The Hobbit: The Desolation of Smaug Expansion Pack for its popular mobile game, The Hobbit: Kingdoms of Middle-earth. The latter came out last year and is a popular reskinned version of Kabam’s traditional strategy games like Kingdoms of Camelot. The new expansion is a free-to play strategy game where players have to fight the evil dragon, Smaug. Players can earn new armor and equip their heroes to challenge players to defeat the dragon.

In the prior Kingdoms of Middle-earth game, more than 1 million alliances have been created (I’m in the TheLevellers, which is ranked at No. 7 among the alliances). Nearly 16 million cities have been built (I’ve got three), and more than four million battles are waged every day.

The alliances make the game a lot more fun — and make it easier to survive. Your alliance can have up to 100 players. If someone attacks you, you can ask the whole alliance to defend you by asking for reinforcements in a battle that plays out in real time. Visually, the art work is nice, but it is a bunch of still screens.

On the other hand, the two new web games have animated moving characters against pretty two-dimensional background landscapes. 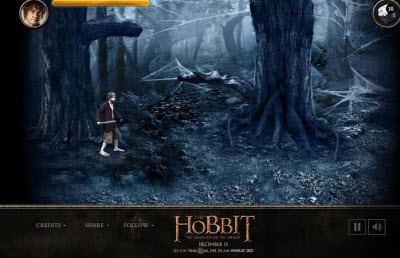 Above: The Hobbit: The Desolation of Smaug – Spiders of Mirkwood.

The Barrel Escape browser-based game has some cool graphics for a web game, though they’re not nearly as good as most console titles or games where you do a big download before playing. In the PC title, you float down the forest river with the dwarves, escaping the elves and evading the attacking orcs. If you hold down your right mouse button, you can target an orc with your bow and shoot an arrow when you let go.

In Trigger’s Spiders of Mirkwood, you play as Bilbo and jump among the branches in the trees of the forest. You kill the spiders and free the dwarves. Both of the web games are pretty lightweight fare, but there’s so much interest in The Hobbit now as the movie’s debut nears.

Kabam chief executive Kevin Chou spoke at the Game Monetization USA Summit today in San Francisco. He acknowledged that Kabam is considering going public, but it does not consider that to be an end point in the company’s evolution.