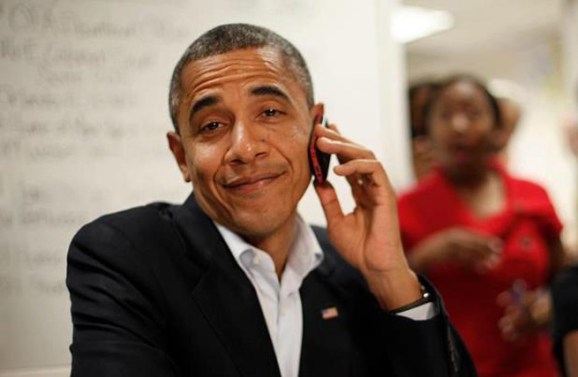 At a gathering to talk about his new health care legislation, President Barack Obama casually revealed to the crowd that he wasn’t allowed to upgrade his smartphone to Apple’s iPhone due to “security reasons,” reports Reuters.

The hangup over Obama’s phone choice came up as the president tried to point out that many of the young people in attendance spend over $100 per month collectively on Internet service plans from telecom companies and broadband Internet subscriptions because staying connected is important and smart. He then reasoned that under the new Affordable Care Act (ACA) they could also get health insurance coverage for roughly the same cost as a modestly priced iPhone monthly service plan.

“The idea that you wouldn’t want to make sure you’ve got the health security and financial security that comes with health insurance for less than that price, you guys are smarter than that. Most young people are as well,” Obama told the crowd.

As this is a tech news site, I’m far more curious about those “security reasons” preventing him from swapping out his BlackBerry for a much sexier iPhone than I am about debating health care policy. That said, I find it a little hard to accept that the same government agencies that managed to penetrate private databases and encryption from the worlds largest tech companies would be incapable of making an iPhone secure enough for the commander-in-chief.

That is, unless the NSA considers Obama as the operator of the device as the biggest weakness in security.

It’s entirely possible that Obama actually is the weak link preventing him from getting an iPhone. While the president is considerably more tech savvy than his predecessors, he wasn’t born with the Internet like the youthful attendees he was speaking to. (I’ve witnessed a fair share of privacy compromising screw ups on smartphones from older people I consider far more intelligent than me.) And unlike the vast majority of Americans, a security compromise on a presidential level would have an exponentially greater consequences — so why take the chance, right?

Well, there are some good reasons why it’s worth the risk for Obama and various federal security agencies to embrace the most popular consumer tech out there.

First of all, using a BlackBerry in 2013 means you’re probably out of touch with the majority of other people. That may sound like an insignificant detail, but the iPhone’s (and yes, Android’s certainly as well) UI and usability can shape a person’s perspective on how to approach and resolve new problems. So, do we really want BlackBerry OS coloring the president’s perspective, or would we rather have iOS, Android, or Windows Phone?

Also, Obama’s BlackBerry in its NSA-approved form seems far more like a business-level mobile device than the consumer friendly, more popular competitors. We need our leaders thinking on the consumer level when it comes to building technology services for U.S. citizens — not bulky-as-hell user unfriendly tech services that alienate and frustrate.

Finally, as a nation whose companies and entrepreneurs are leading the world in technological advancement, I’m sad that giving Obama his choice of smartphone even merits a discussion. After all, 44 years ago we put a man on the moon just to say we did it before anyone else. But in our current era, we’re struggling to keep a man on Healthcare.gov long enough to sign up for health insurance coverage and telling the commander-in-chief what smartphone he’s allowed to use.