Twitter launched retargeted advertising today in mobile via an ad product the company calls “tailored audiences.” The product had been in private beta for three months, but is now available globally to any advertisers.

Essentially, since you visit Twitter on both mobile and desktop, Twitter knows both who you are and can connect you with your online browsing history via cookies in your browser and ad exchanges. So if a Hawaiian hotel wants to advertise to people who might be interested in taking a vacation on the Oahu, it can now go to Twitter, ask for an audience of people who have recently visited Hawaii vacation-oriented sites, and promote its tweets directly to those people. 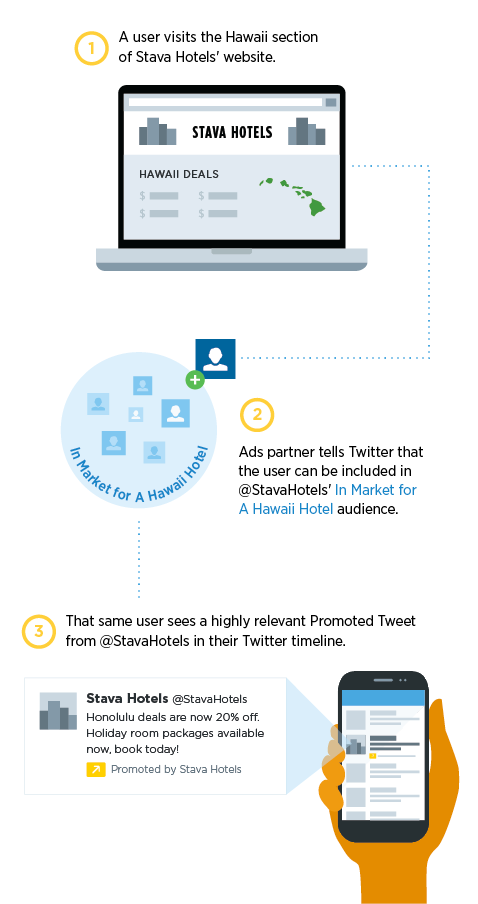 Facebook has already initiated retargeting, of course, in its news feed on desktop, and it provides the same advertising opportunity on mobile. Both Facebook and Twitter is uniquely positioned to offer high-quality mobile retargeting opportunities to advertisers, because they are two of the few services that most users visit both on desktop and mobile — meaning that not only do they know who you are in a user account sense but also have a good idea where you’ve been visiting on the web.

Twitter says retargeting is getting huge results for advertisers.

Hubspot, for instance, saw 45 percent higher engagement, according to Twitter, in a test of this technology. A small company that serves the sports coach market says that is saw a massive 74 percent decrease in customer acquisition, and New Relic got 195 percent higher conversion rates — all impressive numbers.

Industry analysts say those numbers make sense, mainly due to the magic of retargeting:

“We recently published research comparing Facebook and Twitter ads, which showed that Twitter ads have much higher CTRs – up to 10 times higher, thanks to their prominent placement in the tweet streams of users,” Wordstream’s Larry Kim told me via e-mail. “Facebook Ads, however, crush Twitter in terms of post-click conversion metrics like revenue per user, etc. – why? It’s because retargeting is one of the most precise ad targeting methods. People are far more likely to buy something that they were already in the market for – it’s the low-hanging fruit for advertisers to go after!”

In other words, retargeting works because it operates based on your own behavior, which is generally a fairly good indicator of what you want and what you’re planning.

Which means that you should start seeing more relevant ads on Twitter soon.

However, if you’d prefer not to be tracked, Twitter has an option to avoid that as well. The company supports Do Not Track and will not feed you retargeted ads if you decline to be tracked in your Twitter settings. It is essentially an opt-out, which might annoy some, but the reality is that at least Twitter has provided the option.

Twitter is working with a defined set of ad partners initially, meaning that advertisers who want to implement this new ad type will have to pick one of Adara,AdRoll, BlueKai, Chango, DataXu, Dstillery, Lotame, Quantcast, ValueClick, and [x+1] to make it happen.

This should make it much easier for Twitter to monetize, as improved conversions and increased engagement have been a significant problem for Twitter. And that makes Wall Street happy — the stock is up $3, or about 5 percent, just this morning.