In its current form, War of the Vikings doesn’t really teach you how to play. After picking a class, you’re thrown into a bloody arena where you must quickly learn the cadence of battle … or die trying.

While developer Fatshark will eventually include a tutorial, the trial-by-fire gameplay seems appropriate for the ruthless warriors it depicts. War of the Vikings continues what Fatshark started with its brutal third-person multiplayer combat in War of the Roses, but here it swaps out the knights of York and Lancaster for the feud between the Saxons and Vikings. Due to the historically inspired theme, you won’t find any traces of Thor or other popular figures from Norse mythology — just good old-fashioned steel-on-steel violence.

But the separation between fact and fiction in War of the Vikings isn’t always as clean as cutting off the head of a Saxon that’s been pestering you with arrows. GamesBeat found out what’s real and what’s made up during a recent press tour of the beta version, which is coming later this month to PCs on the Steam digital-distribution service (the alpha is available now through Steam’s Early Access program). 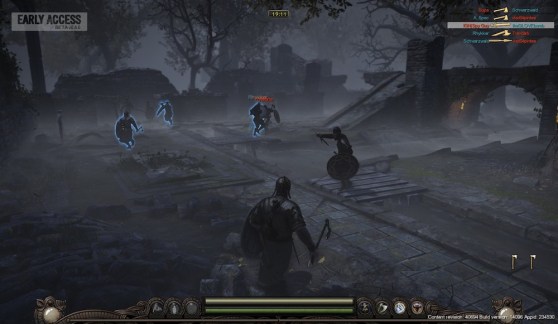 Above: War of the Vikings’s Sanctuary map.

Staying true to the Viking culture

As part of an effort to evoke the Viking age, Fatshark hired Icelandic actors and others fluent in Old English. They pop up in what the developer calls battle chatter: lines of dialogue meant to give you clues about what’s happening on the battlefield, such as a character pointing out an enemy archer in the distance. When your teammates (on either team) speak, you hear English. But when your opponents speak, you hear a foreign language: The Saxons yell in Old English while the Vikings talk to each other in Icelandic.

After working closely with an archaeologist who specializes in Viking combat and history, Fatshark decided to include female warriors to War of the Vikings’s roster. They aren’t available in the beta, but executive producer Gordon Van Dyke promises they’ll come in a future update.

“The Vikings actually had a much more equal society in that sense. Both boys and girls were trained in combat when they were growing up,” he said. “A woman had a choice when she came of age: If she wanted to continue the lifestyle of being a warrior and earning a living that way, or become a housewife. Even if she went that route — stayed in the house and got married and had children — she was still required to train the kids how to fight. You still had to be a good fighter no matter what. It was a warrior culture.

“And so we really wanted to make sure that’s in our game. I don’t want to reveal too much, but we are definitely going to be able to have at least the Warrior class, which is a bit ambiguous, [and an option to] select a female face and voice as well in the battle chatter. But we have some big plans to highlight and show off just how progressive in certain areas the Norse culture was.”

Since weapons don’t have huge statistical advantages over one another, combat is more about what style you want to play with rather than a race to see whoever can grab an overpowered ax or sword. Thus, the easiest things to unlock in War of the Vikings (via coins you earn from playing) are the weapons. Cosmetic items, like new beards and elaborately designed shields, are the most expensive of the bunch.

“A lot of people don’t realize that the Vikings were an extremely vain and very gaudy culture,” Van Dyke said. “They were importing silk — going into battle with silk shirts and things like that. They wore lots of jewelry. We just want to focus on what they did.”

Taking artistic license where it made sense

When it came to designing the Saxons and Vikings, Fatshark hit a small road block: Both sides looked too similar to each other. In order to avoid confusion among players, it decided to create its own interpretation of their gear and clothing.

“There wasn’t a massive amount of differences in their looks that we could find when we were doing research,” Van Dyke said. “We decided to just make up our own thing and make the Saxons have more warm colors — reds, yellows, and oranges. They would have a more Romanesque feel to them; their helmets have a more Roman flavor to them. And the Vikings would just take the look that both of them had, [but more of it].”

Making maps based on people’s expectations

In multiplayer games, maps (and the paths within them) are just as important, if not more so, than the individual weapons and perks that players have, so it makes sense that War of the Vikings’ levels aren’t based on any place in particular. For instance, Cliff — with its large fortress, Christian symbols, and gloomy weather — lives up to the kind of environment people normally expect when they think of Vikings and Saxons fighting each other.

The smaller Sanctuary map, meanwhile, took inspiration from Roman ruins and uses a dark, foggy atmosphere for a more iconic portrayal of the English countryside. 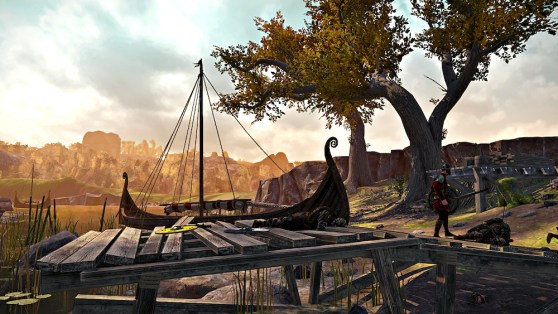 Above: Can’t have a Viking game without a Viking ship.

By blending what little factual information they had (the Vikings, for all their accomplishments, didn’t record anything on paper) with artistic interpretations, Fatshark and publisher Paradox Interactive hope that War of the Vikings dispels popular misconceptions about the culture.

“[We want to] create a cool, positive interpretation of the Vikings,” Van Dyke said. “And let people [know] that they weren’t these barbaric, dirty, ignorant savages. They were a highly intelligent and very sophisticated culture that was far from [being] barbarians. They just took advantage of a scenario to make money. Basically, they were early capitalists [Laughs].”