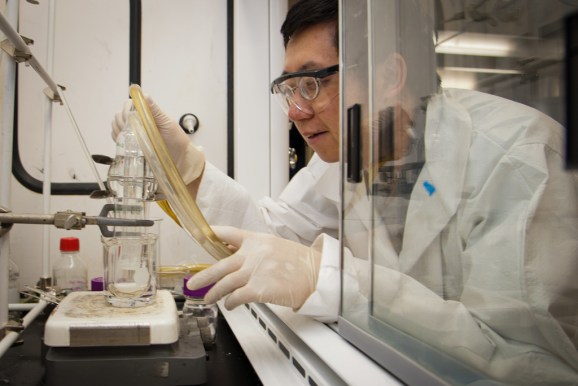 Kang Xu, a scientist at the U.S. Army Research Laboratory.

Academia.edu wants to help researchers share their scientific papers freely. But at least one publisher of academic journals has more, well, nuanced thoughts on access to the research — and it’s issued requests for thousands of papers to be dropped from the site.

The news surfaced in a post on Sauropod Vertebra Picture of the Week, a blog about open access.

In response to Elsevier’s requests, Academia.edu has sent messages to several academics on the site to let them know their papers have been removed. And that’s gotten a lot of people talking on Twitter.

In an email to VentureBeat, Richard Price, Academia.edu’s chief executive, told a bit of the backstory.

“In the past, Elsevier has sent out one or two DMCAs a week,” Price wrote. “Then, a few weeks ago, Elsevier started sending Academia.edu DMCA take-down notices in batches of a thousand for papers that academics had uploaded to the site. This is what has caused the recent outcry in the blogosphere and Twitter.”

The message Academia.edu sent out casts Elsevier as getting in the way of Academia.edu’s very mission:

Academia.edu is committed to enabling the transition to a world where there is open access to academic literature. Elsevier takes a different view, and is currently upping the ante in its opposition to academics sharing their own papers online.

The Chronicle of Higher Education has a statement from an Elsevier executive. “We aim to ensure that the final published version of an article is readily discoverable and citable via the journal itself in order to maximize the usage metrics and credit for our authors, and to protect the quality and integrity of the scientific record,” the executive, Tom Reller, told the Chronicle in an email.

Still, Elsevier’s ramping up of take-down requests is reminiscent of the shake-up happening as a result of the rise of massively open online courses, which have enabled millions to learn at a high level — for free. It could be that the basic premise of Academia.edu will throw things off kilter for publishers and cause them to react. And it even has a bit of the flavor of Aaron Swartz’s efforts to liberate academic papers from the premium site JSTOR.

Price thinks things could be changing on the openness front.

“Perhaps the most interesting point here is that the tides are shifting in the academic community’s overall attitude toward open science, and that increasingly scientists and researchers want to be able to share their papers online,” he wrote in his email.

Academia.edu, a five-year-old site, claims nearly six million academics have signed up on it. It recently took on $11.1 million in funding to grow. Its community has a shot at growing further, which could raise the stakes for publishers.