My first time on the track was a disaster. I hit the wall three times. I spent more time off the track than on it. I even wound up driving the wrong way at one point. My lack of digital driving skills is without question. Yet, here I am reviewing Gran Turismo 6, Polyphony Digital’s latest entry in its long-running “Real Driving Simulator” franchise. I got to spend some time with the game’s single-player content recently, and I’m here to give a newbie’s perspective. Did my time with Gran Turismo 6 make me a racing game convert?

The cars are pretty

Car lovers will find a lot to like in Gran Turismo 6. Polyphony Digital created more than 1,200 vehicles for GT6. They’re gorgeously detailed and handle well. A wide range of models from America, Europe, and Asia are here, and they’re all unlockable using in-game credits you earn while racing. The ’78 Pontiac Firebird Trans Am was one of my favorites; it’s the same car that’s in the 1977 Burt Reynolds movie Smokey and the Bandit. Unfortunately, it doesn’t come with 400 cases of Coors beer.

Although the vehicles are lovely, especially during the cinematic replays at the end of each race, they’re also visually inconsistent. Damage to your car is barely noticeable. You can smash it head-on into a barrier and come away with barely a scratch. It’s impossible to total your car or explode in a fiery wreck, which is surprising in a game that strives for realism. Unfortunately, my best Ricky Bobby impression is going to have to wait for another game.

Once you’ve purchased that new Jaguar XKR-S or Corvette Stingray and driven it off of the virtual lot, plenty of customization options are available. Polyphony claims that all cars in GT6 are treated equally; it no longer has any limitations on performance tuning or race mods. You can modify each car’s suspension, transmission, power, and body in various ways. You can buy parts to make them more aerodynamic. You can even give them oil changes. Outside of paint jobs, however, exterior options are disappointingly limited.

Newcomers to Gran Turismo might want to start in Career Mode, which teaches the basics of racing during license tests before throwing you on the track. As you progress, you’ll unlock special Coffee Break missions, fun bite-sized challenges that ask you to do things like knock down a certain amount of traffic cones inside a stadium or perfect the art of drifting. It also has an Arcade Mode for people who just want to just hop in and play a quick race. The supposedly revamped Online option wasn’t available during review. Once the servers go online, however, players can create their own public or private clubs, organize races, and take part in seasonal events.

Polyphony Digital has plans to add to its already impressive list of content in the future. It says 20 of the world’s leading automotive manufacturers and design teams have created cars specially for Gran Turismo 6, and the developer plans to make them available, one at a time, over the course of a year. These new cars and tracks will be redeemable with in-game currency, which you can earn through gameplay or by spending real-life cash in the PlayStation Store (see below). Notable features from previous games, like B-Spec mode and the Course Maker, will also be available at a later date.

Above: Sony’s Gran Turismo 6 in action.

Although it has a lot of content, Gran Turismo 6 feels somewhat monotonous fairly quickly. After a while, the tracks and surrounding areas began to suffer from a sense of sameness. This could simply be because I’m not a racing fan and don’t get the appeal of driving around in circles without so much as a rocket launcher or turtle shell to break up the routine. The generic and sparsely filled grandstands didn’t help, either. Most of the time, the fans just stood there on the sidelines, silently judging me every time I took a turn too hard and spun off of the track. Occasionally, one might wave or snap a photo, but it felt like their heart really wasn’t into it. It’s as if it was free prescription drug day, and they were passing out Xanax at the gate.

Even the brand-new Lunar Missions are dull, faithful but boring recreations of historic Lunar Rover missions like the Apollo 15 expedition. I was expecting some low-gravity hijinks — what I got instead was a slow-motion meander in a nearly straight line across uninteresting gray terrain. Actual moon exploration is actively discouraged, I found out, as I tried to drive my astronauts into the St. George crater in disappointed despair. Veering off course immediately disqualified me from the so-called “race,” forcing me start the mission over again.

Everything about Gran Turismo feels functional but a bit soulless. Lonely, even. Where is the cheering of the crowds? The color commentary from the announcers? The lack of vocal content is a bit jarring for someone used to games full of characters and dialogue. I suspect online play will liven things up, however, when you can gleefully trash talk with your friends over headsets.

Turn it off and play your own tunes. You’ll enjoy the game a lot more.

Microtransactions are a touchy subject for many people these days. They’re completely optional in Gran Tursimo 6, but some might think them a turnoff, especially considering that it already costs $60 to play. According to a recent Eurogamer report, Gran Turismo’s virtual currency, called Credits, can be bought in increments of 500,000 (€4.99/$6.81), 1 million (€9.99/$13.63), 2.5 million (€19.99/$27.26), or 7 million (€49.99/$68.18). One million Credits can get you a nice car, like the aforementioned Pontiac Firebird Tras Am, along with a significant amount of upgrades, and still leave you with many credits left over. Since servers weren’t online during this review, it’s impossible to say at this point what effect this will have on the economy and multiplayer balance.

Personally, I think microtransactions in a full-priced game are a bad idea, even if they are optional. They are designed to give a jumpstart to players who don’t want to spend the time grinding the credits through racing. Sony is essentially giving you the option to pay them money to play the game a little less. And if you’re spending your hard-earned money to spend less time with a game, you might want to think about why you’re playing it in the first place.

Gran Turismo 6 is not a game for the uninitiated. It’s made for racing fans by racing fans. It’s for people who know that front/rear weight distribution isn’t a euphemism for holiday weight gain and that the Gap doesn’t refer to a mall clothing store. As a nonracing fan, there’s a lot about it I still don’t understand. What are performance points and why are they important? I have no idea what torque is. I have no idea what an exhaust manifold is or why it improves my car’s racing ability. Admittedly, some of this information is available in the game, but it’s densely packed into the user-interface and might prove intimidating to newcomers. I didn’t care enough to look for it. More importantly, Polyphony did nothing to make me care. Outside of a few beginner driving lessons, it feels as if you’re supposed to know all of this stuff already, and that could alienate some of the new blood this aging franchise needs to stay relevant in the next console generation.

I wouldn’t recommend it to everyone — but die-hard racing fans looking for a robust amount of content will be satisfied with it for months to come.

Gran Turismo 6 debuted on Dec. 6, 2013, for the PlayStation 3. The publisher provided GamesBeat with a copy of the game for the purpose of this review. 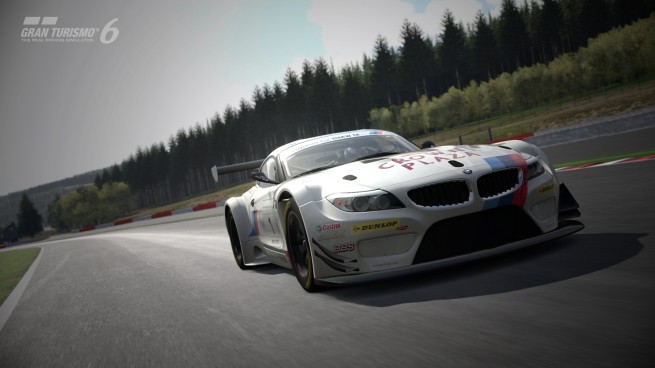