Puzzle & Dragons is one of the most financially successful games on any platform, and that’s because this mobile title gives players plenty of “opportunities” to spend money. Now, developer GungHo Online Entertainment is taking away some of those opportunities in its puzzle-based role-playing title — that at one point was making more than $3.75 million daily. 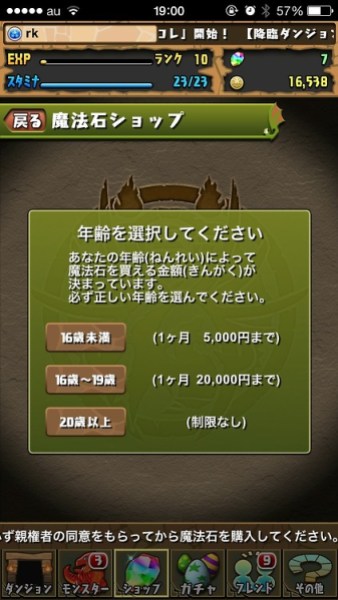 Above: Puzzle & Dragons limits young gamers to $50 or $200 per month, depending on their age.

The studio is instituting a limit on how much younger players can spend, as first spotted by Tumblr blog Revanantkioku (via Daniel Feit). Gamers under the age of 16 can now only spend 5,000 yen (approximately $50) each month, while players ages 16 to 19 will have a $200 monthly limit (thanks to Twitter user Cheesemeister3k for the translation). Adults 20 and older are free to spend the entirety of their life savings on the game.

These aren’t exactly stifling restrictions. After all, $200 a month is practically a car payment. The game also prompts players with an appeal to answer honestly how old they are, which means that determined 15-year-old Puzzle & Dragon players could easily say they’re 40 while spending as much money as they like.

We’ve reached out to GungHo to ask why it is implementing spending limits at all. We’ll update this post with its response. It’s likely that the company is hoping to avoid any government-mandated regulations by imposing restrictions on itself. We also asked if these spending controls will come to other territories.

Puzzle & Dragons is a very lucrative game. It is consistently the top-grossing game in Japan on the iOS and Android app markets, according to tracking firms like App Annie.