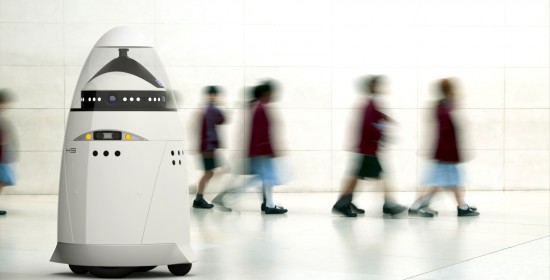 So this entrepreneur wants to put a bunch of 300-pound, autonomous security robots into circulation around the world — in schools, malls, public streets, you name it.

These bots are equipped with cameras, location trackers, and every kind of sensor you can imagine. They can recognize faces and scan biometrics for “suspicious” behavior. They travel autonomously around designated areas and can summon human law enforcement with lightning speed.

We had a fascinating conversation with William “Bill” Santana Li, Knightscope founder and CEO. Knightscope is the company behind this concept bot, called the K5. And Li’s answers (and non-answers) pretty much confirmed the privacy-nutjob concerns we had in the first place.

The tl;dr version: Yes, foreign governments and organizations will be able to buy and/or rent the bots. Yes, the data the bots gather can be logged, stored, and broadcast in any way Knightscope and its customers see fit. No, there’s no way to opt out of being tracked or recorded by these machines.

And yes, this interview emphasizes the ever-thinner line between surveillance for public safety and government and corporate spying on private citizens.

VentureBeat: What are the chances of a K5 returning a false positive — thinking an innocent doppelgänger is a dangerous person?

Li: Knightscope is set of technologies including hardware and software that ingests, generates and analyzes a vast amount of data, and sends alerts to humans to decide the right course of action.

VentureBeat: Is sensor data logged permanently or semi-permanently, or is that up to the customer?

Li: The logging of data is primarily up to the particular customer and application.

VentureBeat: Who can rent or purchase a K5? Are there any restrictions, such as no private persons or felons or something?

Li: The Knightscope K5 may be used in many industries and environments. As for restrictions, we will closely vet the entities that inquire about using the K5 with a primary focus on businesses, security firms and law enforcement authorities. No “bad actors” allowed.

VentureBeat: To me and others in the privacy camp, making sensor and other data publicly available sounds like an even bigger privacy violation than storing it privately. How does the company respond to those concerns?

Knightscope intends to live stream any and all information gathered when we push a safety alert to the community and the authorities with full transparency. We can leverage the social media infrastructure and make crowdsourcing security a reality. Technology will save lives and improve society.

The general expectation of privacy in a public area, with emphasis on the word public, is similar to that of entering a department store, doing a transaction at an ATM, or even purchasing something at the local convenience store.

Privacy concerns are not what puts people on edge. What puts people on edge is being shot at. It is not okay to have these ongoing concerns at work, at school, at the mall, or a movie theater. We are working to address a massive issue that impacts everyone and everything, including your taxes, municipal budgets, housing prices, financial markets, and society as a whole. Crime has a $1 trillion negative economic impact on the U.S.

VentureBeat: What are opt-out options for concerned citizens? Will people be able to find out if K5 units will be patrolling a venue or event in advance? Will that be required of K5 renters/purchasers?

Li:In this sense, the K5 is no different than security cameras and security guards at venues and events. With the K5 we extend human security guards’ awareness by providing them with relevant, real-time information to make the appropriate decisions.

VentureBeat: Currently, the K5 bot does not support weapons. Would a purchaser be able to outfit it with weapons, from pepper spray to modified guns?

Li: The K5 is a friendly community tool used exclusively to deliver relevant and real-time information to the appropriate authorities. Our business model is a primary focus on Machine-as-a-Service (MaaS) so in a majority of cases, the unit remains the property of Knightscope with laser focus on keeping it a positive influence on the community.

VentureBeat: Would the company sell K5s to persons or organizations outside the United States?

Li: Yes, we already have inquires from organization outside the United States. Inquiries have come flooding in from events such as the 2014 World Cup and the 2016 and 2020 Olympics. However, given the startup nature of Knightscope, our primary focus is the USA first.

VentureBeat: Does the company imagine that K5s may be prohibited by some states or countries?

Li: The first role of government is to protect its citizens.