Respawn Entertainment showed off more goods from its highly anticipated first-person shooter, Titanfall, coming to Xbox One, Xbox 360, and PC. The startup showed off a video that displayed a new Titan, dubbed the Ogre, a mech that is much different from the others we’ve seen in previous footage of the game. 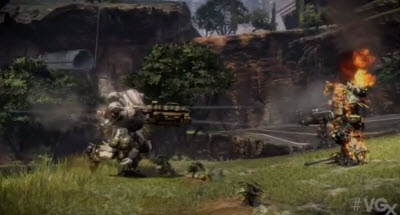 Above: Titanfall’s Ogre can rip a rival to shreds.

The announcement came during the Spike TV VGX awards. Joel McHale and Geoff Keighley hosted the show. The title is coming out March 11, but a beta test might happen before that, said Vince Zampella, co-founder of Respawn and one of the veterans who made the Call of Duty series into a blockbuster shooter property.

The video shows off a faux commercial by Hammond Robotics, the maker of heavy-weapons mechs. An announcer glibly talks about a new class of Titans known as Ogres, stating that the heavily armored, robot-like mechs have succeeded in “inflicting over 50 percent more damage” on enemy units.

The Hammond Robotics company, which humbly calls itself the “titans of the industry,” makes the robots and “changes the robot diapers,” Zampella joked.

Zampella confirmed the game will not use Microsoft’s Kinect motion-sensing system, as it doesn’t fit the experience.

Here’s a trailer below.

Update: And in another revelation, Respawn showed an additional video that included a different mech called the Stryder, a huge robot with long legs that can outperform other Titans when it comes to speed, agility, and acceleration. It is fast enough to evade oncoming missiles and to shoot down a pilot trying to attack from the air.