Video game maker Techland recently showed off a cool combat demo on the PlayStation 4 from its upcoming Dying Light. In the open-world zombie game, you can fight the undead during both the daytime and the night. 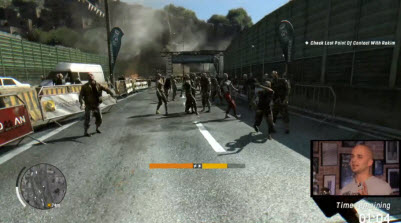 Above: A crowd of zombies in Dying Light.

The zombies are somewhat easy to beat in the day, but they become powerful hunters, aided by other kinds of monsters, at night. But, as the protagonist, you’re quite capable too, and you can show off athletic parkour skills against the undead horde.

The title is coming in 2014 from Warner Bros. Interactive Entertainment. The latest demo took place during the Spike TV VGX awards. Joel McHale and Geoff Keighley hosted the show. A pro gamer named PewDiePie showed us what it was like to fight the zombies at night, when they’re nastier.

In Dying Light, you can quickly look back and see who is chasing you and then proceed without losing your footing. You can also twist a zombie’s head of with your own hands. It’s not just about combat. You need to master parkour-style maneuvering to get around the zombies. You can climb and get on top of anything you see, like stepping on top of a zombie to get on a roof. Some of the enemies are quite nasty. One has a gas tank on its back. If you hit the tank, the gas will start leaking, and the zombie will explode.

If you break one of the zombie’s bones with a weapon, Techland will actually show you the bone breaking in slow motion. As for parkour, you can swing around the rooftops of the game’s world, where you can find weapons caches.

One of the great weapons is a two-handed ax that you can use to split a zombie in half if you hit it just right. You can also use a sledgehammer to land visceral shots on the hostiles. Dying Light is an action survival game, and sometimes it is better to run than to fight. The title features an open world, so you’ll have many ways to reach objectives.

The game has a mission system and story as well. You can also fight other humans to pick up air drops of supplies, too. But the demo didn’t show that.